Heat Work and Degree of Slump

Searching for a Relationship in Heat Work in the Slumping Range.

Now I know why so little research is published that indicates a lack of any positive results.  It is disheartening.  There is no pointer to other methods or relationships.  It is difficult to pick yourself up and try something different.

Some things did become apparent (many of them already known)

Holding time constant and increasing the temperature results in greater deformation.  Nothing new in that.  Holding the temperature constant and increasing the time results in more deformation.  No general relationship could be determined.  But at 650C changing the time from 15 minutes to 45 minutes resulted in an almost linear increase in the proportion of deformation, but a decreasing proportion from 35 to 55 minutes, although generally regular from 15 to 35 minutes.

There is a mild relationship in the amount of deformation between increasing time between 640C and 670C, but this breaks down at 630C and below, where increasing time does not “counteract” the lower temperature.  My speculation is that the viscosity is too high below 630C to maintain that (very mild) relationship. 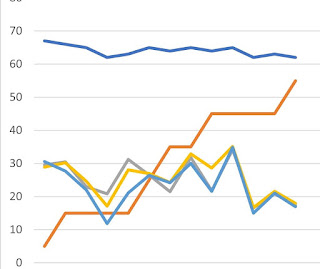 There is a relationship at a given temperature with the proportion of deformation within each thickness. 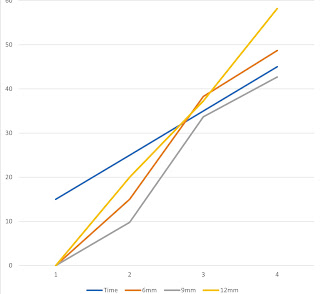 This graph shows increasing time at 650C.  The 12mm thick test piece has a relatively regular change throughout the time range of 15 minutes to 45 minutes.   The 6mm and 9mm pieces show similar proportional changes up to 35-minute soaks, but then drop as the time continues to increase.  This is weird and requires further investigation to see if it is an experimental bias or something else.

At the best, this writing up of my failures, has led me to renewing my tests of deformation by controlling for time and for temperature separately.  The first of the new tests is in the kiln now.

Posted by Stephen Richard at 14:34 No comments:

A little story by Ali Rogers about an installation far away from its origin in Scotland. 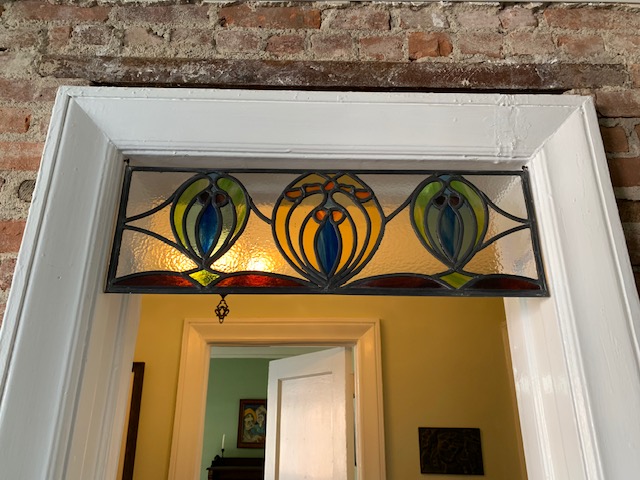 ...so you know how your parents would tell you that one thing leads to another thing, and you never know exactly how a kindness plays out?

Well, please see the attached photo of a stained-glass piece....this was a closing gift from me to a buyer client, C.

C's day job is to hunt down corporations that are committing tax fraud, so she's really doing the Lord's work. I knew I wanted to get her something REALLY special.
As you can see, that ended up being a Stephen Richard original.

I'm really pleased that the panel arrived in New York City in one piece.  I'm also pleased that both "cleints" are pleased with the result.  It is the second NYC project.  It would be nice to get more.

Posted by Stephen Richard at 23:35 No comments:

I was called out to look at a door panel that had been broken because a delivery person decided to knock on the glass rather than the door frame.  In doing so, he broke one pane and unshipped some others.  The client and I agreed on a price.  In removing it, it became apparent that there were even more broken joints than I noticed initially.  When we got it back to the studio, we began preparations to take it apart and rebuild it.

After the rebuild, we installed the door panel with great success.

The replacement glass is not apparent without close inspection, all the glass is clean and the lead and joints are sound for a few more generations.
Posted by Stephen Richard at 10:46 2 comments: