Glass Supplier to the Fashion Industry 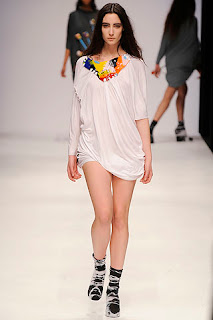 My involvement with the London Fashion Show began some years ago when I did some work for Amy Stephenson's father. Of course, I didn 't know it at the time. In the Summer Amy and her father came to talk about body casts and possible uses. They took away a mould to try out some ideas. In October they came back with some samples they had prepared and proposals for my involvement in producing glass pieces for Amy's outfits. The first sketches of the ideas are below: 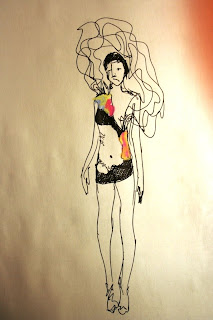 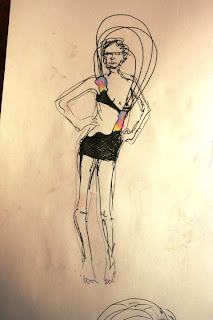 We began experimenting with various means of attaching the glass to the cloth. We looked at slots, holes and looped wires. The holes won out in the end. We also tried out some backing for the glass pieces. This picture shows some of the brass and copper mesh that we fused to the backs. 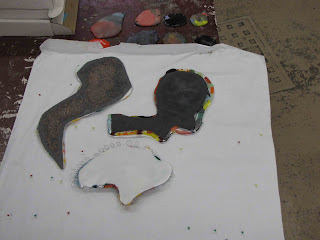 The fronts appear unchanged whether they have backing or not. 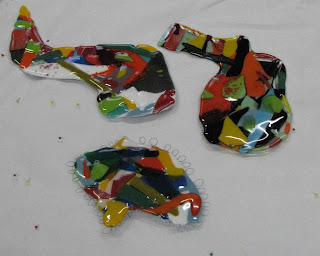 We found that the copper stuck best, but only on black backed items. Later, when some unbacked pieces were dropped on the cutting room floor, it was discovered that the backing was not necessary.
We also tried out the wire connections between pieces. An example of these tests is below. 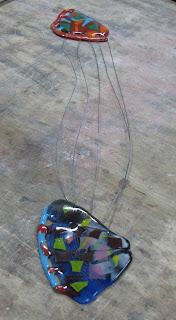 As we proceeded and Amy experimented with and developed her ideas, the structures simplified, but the decoration and shaping became more precise. Things were pretty relaxed at this stage with ideas coming and relatively long time scales to prepare the pieces. This did not last.
Posted by Stephen Richard at 17:28 No comments: