This commission was for a boy's bedroom in an old building which has been completely refurbished while keeping as much of the original as possible.

The brief was to provide a lighting feature that would form part of the partition between the bedroom and the bathroom.  It needed to reflect sporting life, especially including tennis and football.  Other than that, we were given freedom to choose colours and specific figures, once the design concept was agreed. 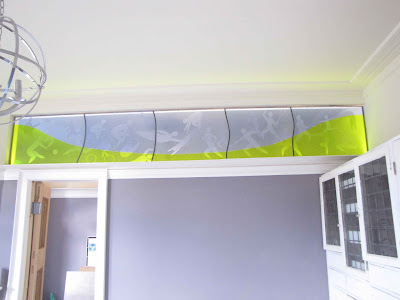 This is the set of five panels installed over an almost 5 metre span.  The design was a collaboration between Dorte Pape and me.  It consists of football players, cyclists, swimmers, runners, tennis players and gymnasts.  The forms and shapes they make while playing are graphically represented.  We were pleased to note the blue of the glass was complimentary with the blue chosen for the walls.

This view from the window shows how the LED lighting throws colour onto the ceiling adding a third colour to the scheme of the room. 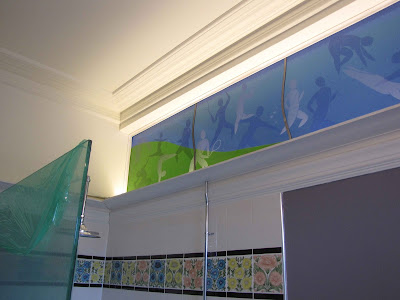 The figures are sandblasted onto both sides of the fused glass panels.  This gives some depth and variation in appearance depending on which side the light shines.  These panels show gymnasts, tennis players, runners and some swimmers.

These panels show more of the swimmers, cyclists and footballers.  Both these bathroom side panels show the different effect of where the light falls as to which side is emphasised.

Posted by Stephen Richard at 07:00 No comments:

Recently, I had the privilege to handle an original Lalique bowl.

This bowl had a chip in the rim.  Removing the chip would return the value of the bowl to the original state price.  There was a bit of pressure to get the chip ground and polished out without further damaging the item. 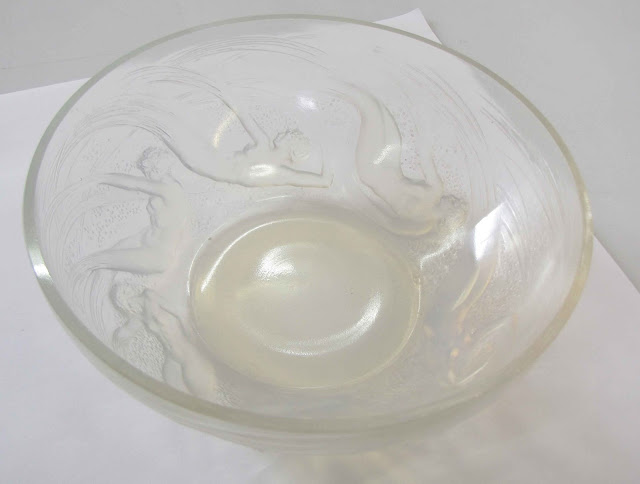 As you can see, I managed it to the owner's satisfaction.

The delight of this bowl is the use of the thickness of the tinted glass to bring out the form of the figures.  Where the glass is thicker the milky white shows more distinctly.  The weight of the bowl indicates that it probably is made from leaded glass.
Posted by Stephen Richard at 07:00 No comments:

Among the interesting things that I get to do are custom bends for interior decoration.

This bend was custom in the sense that the glass needed to protrude from the apertures to form a rectangular protrusion that is most apparent when the light is off.

This is the finished and installed set of lights by the designer Martin MacGuire. 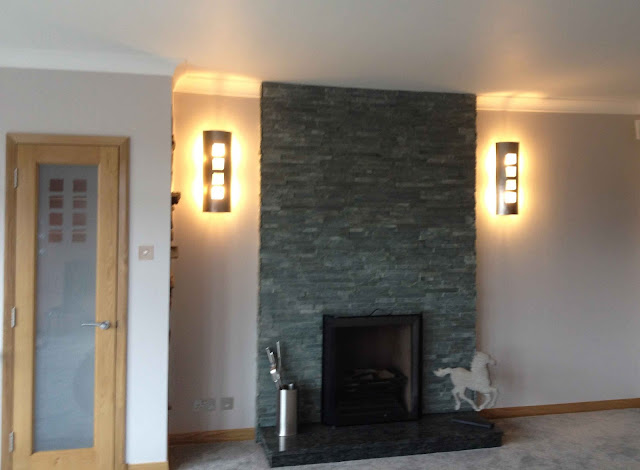 Posted by Stephen Richard at 17:23 No comments: