As you may remember I was accepted along with others on the basis of a proposal to exhibit with a travelling exhibition organised by SGS. I have now completed the piece: 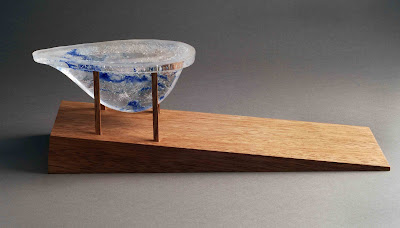 This will be packed and unpacked by other people at least four times during the next year. My experience with helping to pack up the Collect work exhibited by craftscotland showed me the need to prepare the packing properly.

At the conclusion of Collect we had three large and heavy objects to pack away. One weighed approximately 30kg. It was of glass with some delicate undercuts. The crate to contain it was lined with polystyrene sheets. Some foam was included and the rest of the space was filled with polystyrene peanuts. The other works had similar arrangements. It just did not feel to be a secure way to transport the works.

So for this work I decided to build a crate with custom fittings to cushion the work from any damage. I felt when I finished that it was such a simple arrangement that others may benefit from a description. So if you don't want a description of crate making and cutting and forming polystyrene, skip to the next thing.
The crate can be made from a variety of materials. Wood is easiest for me. I used some plywood offcuts to form the base and sides. The ends were formed from 3 ply plywood with 19 by 45mm timber cut and nailed to it. 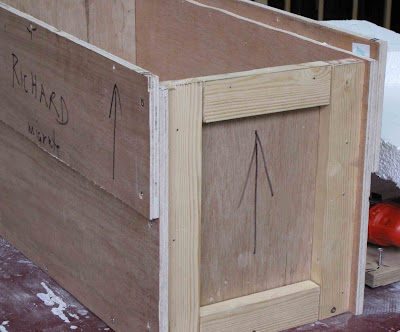 The side rail does not have to be so large as I made it - just too lazy to cut it down, I guess. The side rail allows the top to be screwed to the sides holding them from expanding or bowing with the pressure of the packing materials. 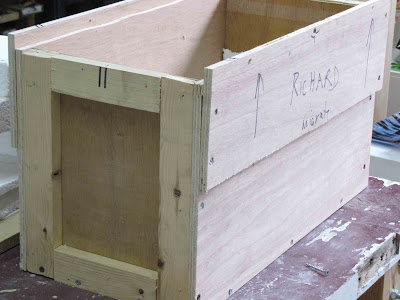 I then cut 50mm. thick polystyrene sheets to fit the case. These were attached together with "U" shaped copper wire stuck into them. The shape to fit the glass was cut with a heated cutting tool. It is a bit smelly and smokey, but does the job. When the shape for the glass was formed, a 10mm sheet had a collar cut out to go around the rim of the glass. 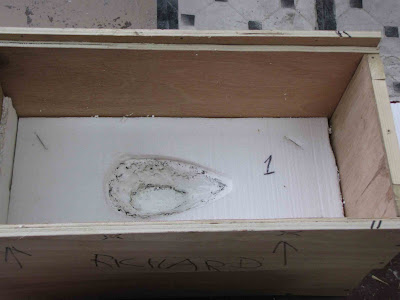 Note that the packaging is also numbered so that each piece is put back into the crate in the order required for transport. When the base layer and cradle for the glass are placed in the bottom of the crate, the glass is added. 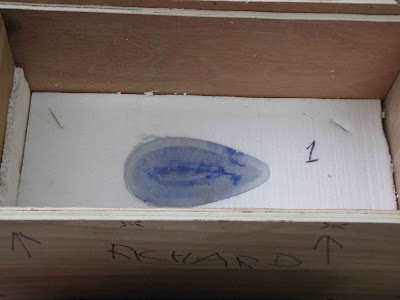 Now the crate is ready to have the wooden part of the work packed. This shows the piece with the glass in the wooden cradle with the packaging around the "slipway". 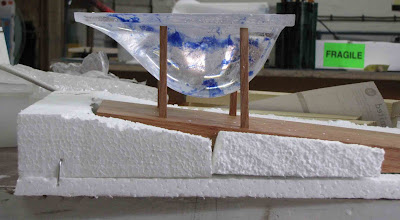 The packaging for the "slipway" is put into the crate separately from the glass and packaging. You can see there is a layer of polystyrene between the glass and the wood. 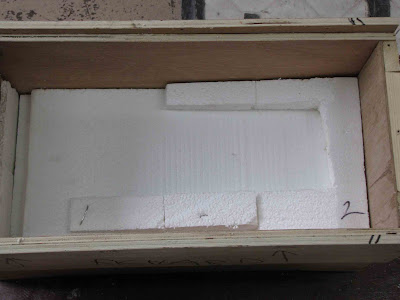 Then the "slipway" is inserted into its cradle. 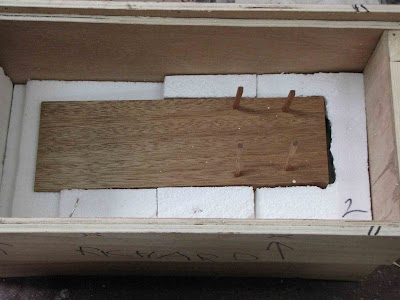 The polystyrene had holes made with the hot cutting tool to correspond to the supports for the glass. The holes are larger than the supports, so there is no pressure on them during transport. 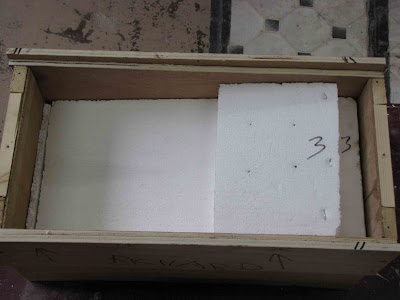 Again the packaging is numbered. The final packing pieces are to be added now. Still each has its number! 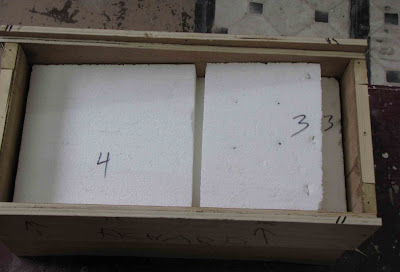 The major pieces of packing are now added ready for the topping out! 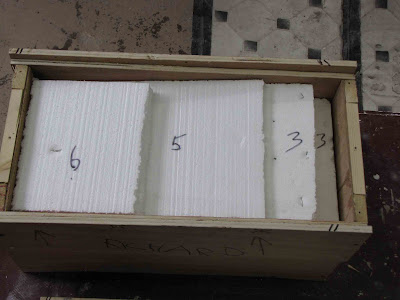 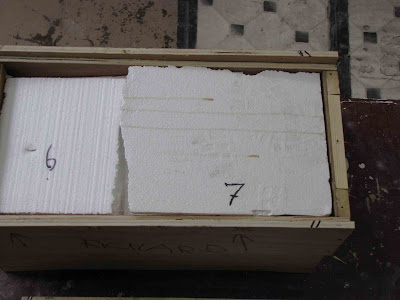 Next add the essential tools and spares. In this case the tool is a two way spirit level so the piece is placed horizontally and level. 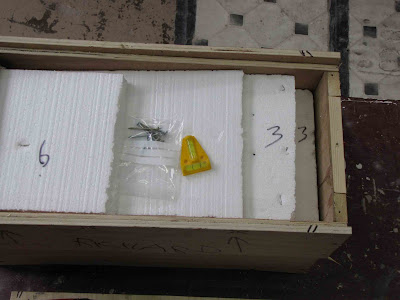 Then there is the necessary photo to show how the piece is to be displayed. 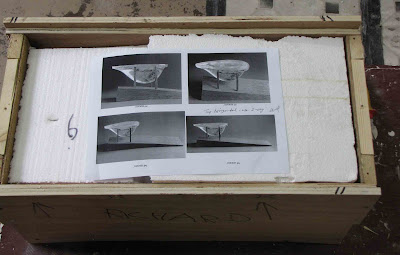 Finally the list of contents and instructions on installation. 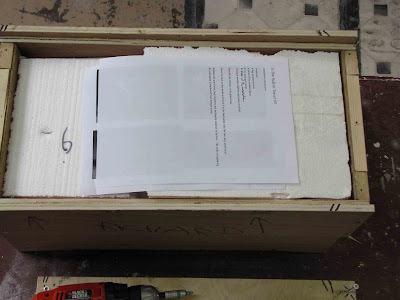 Now the lid can be put on and screwed down. Note the locating marks on the lid to show how it fits without having to run new pilot holes for the screws. The screws to be removed are noted with an "X". 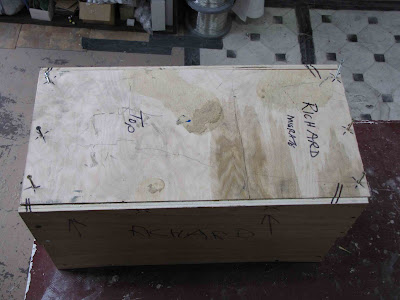 All screwed together solid and ready for delivery. 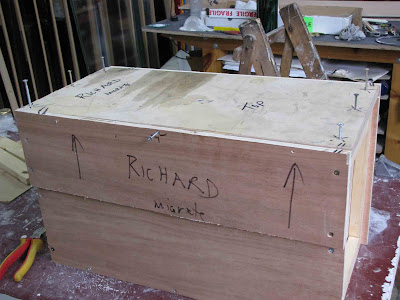 If the instructions are followed everything should be secure for delivery to the buyer!

Posted by Stephen Richard at 20:42 No comments:

Preparing for the Exhibition

Artist-led exhibitions make me realise why we pay commissions to galleries.

I spent all of Wednesday making table like plinths for the exhibition.

These are simple objects that require stability, must be plain to avoid competing with the object(s) on it, and - in our case - must be flexible and easy to store.

Based on two different design suggestions, I have constructed a table supported -but not attached - on a pair of right angle support legs. These legs are hinged so the whole can be closed and stored flat. As the legs are hinged, each pair can be combined to form a square plinth with the addition of a top.

The process of construction is simple too - although it does take time. The four I made took most of the day with the usual interruptions.

First you use a butt hinge to make the right angle supports. This is arranged so the support cannot open beyond a right angle:

When this pair of supports is screwed together, you place them on the up-turned top and place battens round the supports for security: 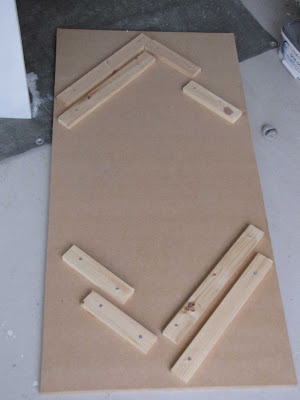 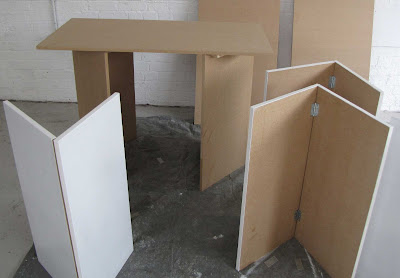 Of course there are all the monthly meetings that led up to this point over the last four months. And there will be the lengthy negotiations on Friday about placing the plinths, and hanging the work on the walls and in front of the windows. But it will be fine.
Posted by Stephen Richard at 22:03 No comments:

"Your glass has faded"

I act as a consultant to a traditional window frame restorer. The other week I was called out after a variety of alternatives were offered to the householder. The householder wanted to keep the leaded glass which dates from the 1920's. It turns out that such radically different alternatives had been offered that an independent assessment of the windows was wanted. As a service to the restorer, I went out early one evening on my way home.

Upon arrival, I was told that so far she had been offered the options of:
- Replace the lot with a new design. The existing windows are so old that retaining them will be difficult
- Triple glaze. Put the leaded glass inside a double glazing unit
- Replace the lot with a new copy. The reason you need to do this is because the glass has faded and is not as bright now as it was originally.

The glass is a mixture of a lightly tinted textured glass background in which the milky glass that turns amber in strong sunlight and a few streaky colours were combined into a stylised motif. The Stained Glass Overlay man was adamant that his material was superior to the original and was guaranteed for ten years.

Well, of course, I disagreed with all of them. The windows are sound. The ties are all still attached to the glazing bars. No work at all is required, as there are not even cracks in the existing glass.

However some work is required on the door. One of the nine light door panels requires re-leading and most of the others require re-puttying. The others had made no comment on the door at all. Oh, and the sidelights were sound too.

Maybe this illustrates why SGO is a thriving business and I have not yet been able to franchise my business over the world. It also shows the underhand - in my opinion - business practices of some people in the stained glass world. The other two companies do traditional leaded glass as a large element of their businesses.

But for me, the statement "Your glass has faded" now ranks along the statement that "All your leaded glass windows are going to flow until they become a puddle on the sill. You need to have these windows recreated on toughened glass to preserve them."

Somebody needs to preserve the clients from such "unethical" practices.
Posted by Stephen Richard at 10:21 No comments:

As some of you will know, I am part of an organisation in the building that is currently called Parade Artists. We are about to have our Spring Show. If any of you are in the area, please come along. There will be self-portrait and mask making sections as well as the show proper.

In addition, one of my pieces made it onto the invitation, which I now extend to you. 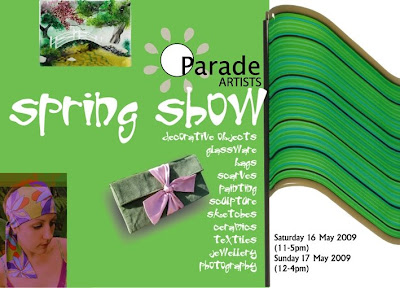 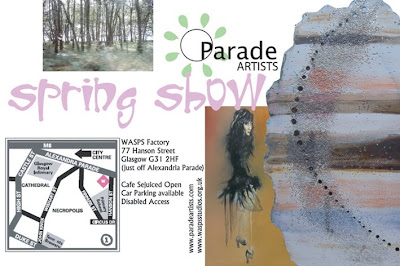 Any of you who are in Glasgow on these days are welcome to come and make yourself known. I hope to see some of you. In any case, have a look at the variety of talented artists who are part of the Parade Artists organisation.

Posted by Stephen Richard at 09:12 No comments:

It is possible to survive without a computer

My apologies for my two month absence. My relatively new computer (nine months old) died on me and has only returned in operating condition to me today.

I have not been entirely without internet access, but it has been limited to short excursions to get and reply to essential e-mails. I don't suppose this two month period will be sufficient to change my habits, but I did get a lot more reading done, more walks in the woods, more conversations with my wife and friends. I should take it as an instruction to limit my use of the internet to the priority areas, of which this is one.

I am back and will make efforts to fill in the gap and keep people up to date.
Posted by Stephen Richard at 22:07 No comments: