I was called out to advise on what can be done for this stair window in Dunfirmline made around the beginning of the 20th century.  It is about 1200 mm wide and 1500 mm high.  It appears to be made in a single piece, which is very unusual.  It has 19 mm square glazing bars and you will notice that at the bottom there is an extra one, presumably for safety if anyone fell down the stairs they would not go through the window to the ground. 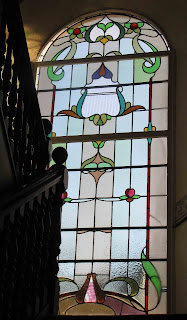 You can see there is internal secondary glazing up to where the round head of the window springs.  In spite of it being open at the top there is considerable condensation within the gap as you can see from this picture of a broken pane.  This makes the point that ventilation needs to be both at the top and the bottom. 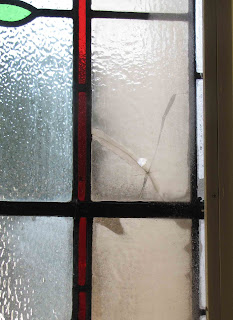 The above image shows the only major break in this whole window.  There are of course small cracks here and there, but nothing obvious or likely to impair the function of the window.  The more major defect is at the bottom of the window where there has been a repair using violet instead of bronze coloured glass. 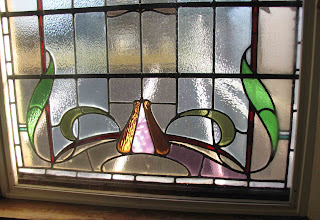 At the bottom, the window is beginning to develop an accordion style bend which is it major problem.  Had the window been built in three sections as I would expect for this size of window, the bottom section could be removed, taken to the studio to be flattened and repaired.  Trying to take this window out in a single section above a glassed in conservatory will be difficult and is bound to cause some breakage. 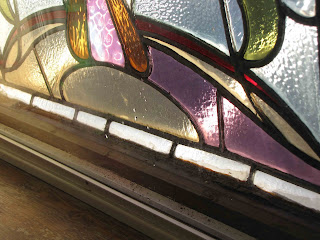 The owners have already decided to put a double glazing unit on the outside of this window.  This will have a gap of about 100 mm between the stained glass and the unit.  This will prevent any further ingress of water and drafts.  It will preserve the life of the window by many years without further action, but will not stabilise it.  I have made recommendations to the owners and await their response. 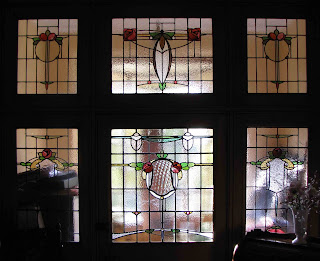 In addition, they have some breaks in this entrance screen.  They are all side by side, which is the most difficult to repair in situ.  So I am recommending that they let me take the panels out (filling the gap with clear glass) and repair them in the studio.

Posted by Stephen Richard at 19:11 No comments: