While on holiday in Hampshire this Summer I took the opportunity to visit some churches.  One of them was St Mary's.  This was built in the mid to late 19th century.

The tower was added later — designed by Edward Maufe, the architect of Guildford Cathedral.

As you enter the church the bell tower is on the left with a nice ceiling and the framework for the bell ropes. 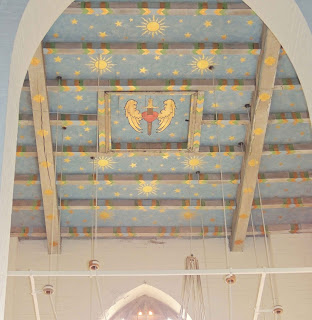 Turning back toward the East, you are presented with a nice timbered roof, the colour of which complements the almost uniform white of the walls. 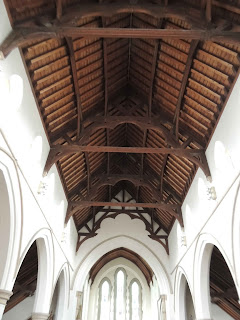 As a result of the time of day and amount of sunlight, my photographs of the East window were over exposed.  They are typical of late nineteenth century windows.

The other windows at the sides of the chancel are of the same nature as the East window.

The windows here depict St Stephen on the left and St John on the right.

Slightly further into the church there are a group of small clerestory windows above the chapel, of which this is an example.

These are possibly the most charming of the earlier windows in the church.  The remainder of the clerestory windows which are largely within the main body of the church are quarry glazed in this pattern.

The main body of the church contains a number of smaller windows in the North and south aisles of various dates.  Among them are a number of memorial windows depicting various biblical figures.


Then, toward the rear of the church are two modern windows.  These are more interesting windows to me as they seem to be responding to the artistic developments of the period.

This is the most interesting window in the whole church for me.  It is relatively small — only slightly over a metre tall, but is lively in its depiction of the subjects and has a lot of technical interest to me.

A further explanation of this interest will be in another blog post.
Posted by Stephen Richard at 07:03 No comments: