One of the reasons for my lack of postings recently is that I have recently finished a contract to provide 134 diamond quarry glazed windows for the set of an American TV series.  Apologies for being unable to say yet which series.  Once the broadcasting begins, I will be able to say.  Filming began just last week.  The company has established itself in an old factory in Cumbernauld, a town just outside Glasgow.

They made an approach to me in June and, although my response was positive - as I have done work for other film sets - I did not hear anything until the late August.  At that point, the request was to do some tests on the kind of glass that could be used to produce authentic-looking 18th century windows which had distortions and had the character of aged windows.

Experiments began on distorting various glasses in the kiln to produce the look required.  After a number of experiments about the level of distortion and marking of the glass, a combination of Flemish and reamy slab glasses were seen to be the appropriate ones.  A film test of the glass showed that decralead - a stick on lead strip - would not be suitable, as it was obvious on film that the glass was a single sheet.  The leaded glass with a mixture of the two glasses provided the best result for the art director and the camera - for only about 25% more in price.

However, only three weeks now remained before the delivery date (which was one week before filming began), so there was no time to lose.  We took a chance and ordered the lead even before the purchase order was received, because the delivery time for this would be longer than for the glass.  Purchase order received, we then pressed for immediate payment for materials, as the cash flow would fail if we did not get that.  The film company was very good and deposited the money in the bank within a couple of days which meant that we could order the glass.

Then the search for people who could help produce these panels began.  Other glass workers and some students from the City of Glasgow College's Art Glass Design course were drafted in to help produce these panels.  I was fortunate to have Aki Rogers as an intern during this period.  I put to use her background in pattern making for the fashion industry to construct the cartoons accurately after I had determined the opening sizes from the templates supplied by the joiners at the site.  Peter Verrecchia, of Stained Glass Supplies,  then cut the diamond quarries to size in preparation for the other workers to assemble the leaded panels.

Enormous amounts of lead and glass were used. Almost 60 square metres of glass (over 5,000 pieces of glass) and 20 boxes of lead came (500 Kg) were used in producing these windows.  But as a surprise to me, we have only about 50 Kg of scrap lead resulting - people were very economical in their use, I guess.

It is a relief that the work is finished, and with only 4 windows having any problems - two needed to be remade and two were slightly small.  We did have a little thank you party for the 15 people involved in the project a week after finishing.  Now I am finding it difficult to concentrate on the next jobs - I'd just like to have a holiday.
Posted by Stephen Richard at 18:52 2 comments:

Another interesting project has come my way.   A burlesque artist approached me with a request for a glass bra.  She is going for an Arts Deco theme and took inspiration from the 1917 film Cleopatra staring Theda Bara 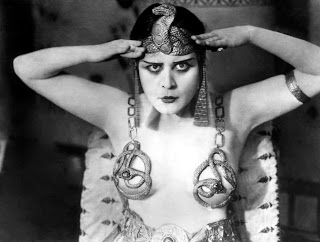 As you can see this was a very dramatic costume as well as having "theatrical" gestures.  The artist also found one part of the bra for sale on ebay. 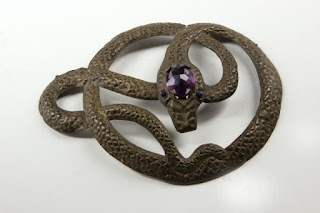 This is a beaten copper or brass piece with a "jewel" set into the snake's head.  (I wonder how the two parts got separated?)

However the artist felt that a glass version would be more dramatic.  So we began experimenting to get the shapes right for her.  A cast was taken to ensure the pieces would be comfortable.  This was used to make a mould for the glass to drape over.


The first trial showed some design faults, requiring the snake's head to be holding the tail, so that it did not slip.  The head needed to be a bit larger, and the linkage system between the two cups improved.  The chain needed to be silver coloured and "flatter".

There were other pieces to be prepared for the costume too.  You will need to wait for the performance for the whole costume to be revealed.  I will add it here when I have the images.

And here is the whole costume: 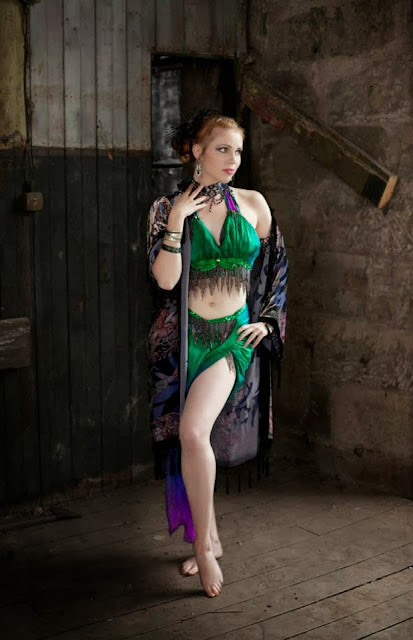 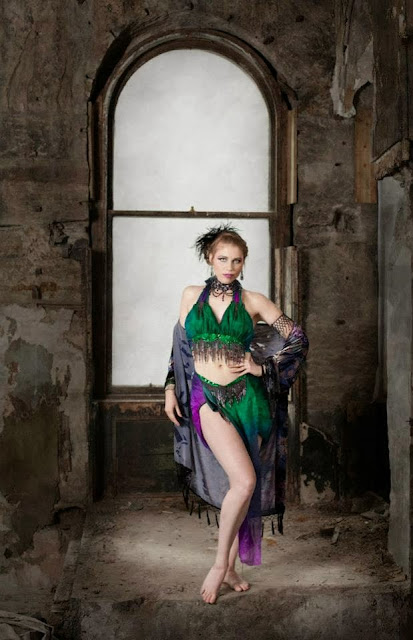 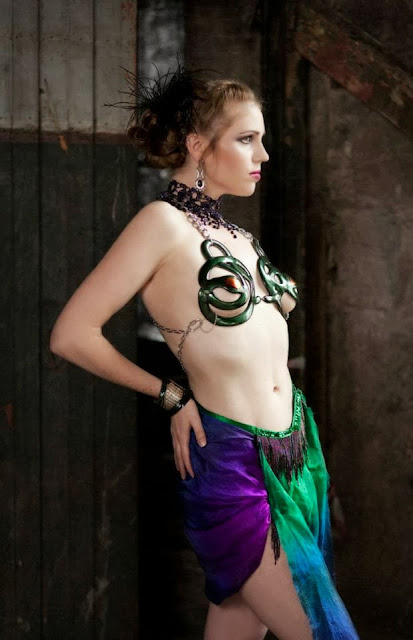