An existing bathroom window needed some repair, as well as consideration on how to keep the bathroom warmer.  It is a large bathroom with the glass in a steel frame. 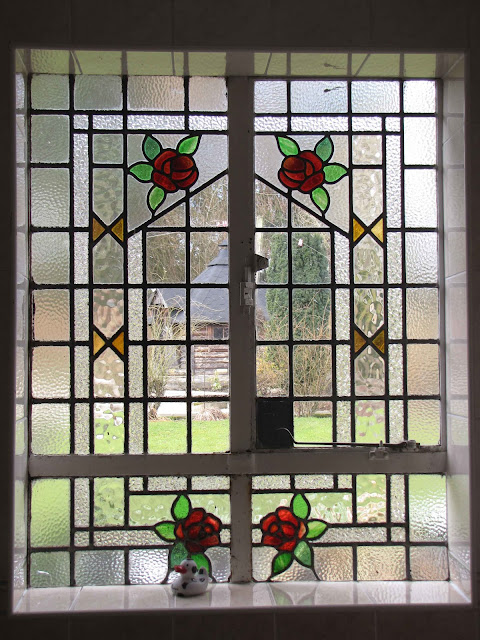 The options seemed to be removal of the frame and installing the reworked glass in a double-glazing unit or secondary glazing.  The removal of the steel frame would require a whole new frame to be installed.  The tile work of the bathroom would be disturbed and need replacement.  All this would have involved quite a bit of expense.  In addition, the glass panels would need to be reworked into a single panel, requiring quite a bit of alteration.

The secondary glazing option would be almost as effective as double glazing, as the walls are thick enough to have more than 100mm each side of the existing frame.  And it would be much cheaper than the encapsulation and associated work.

In either case, there were panes to be repaired, and the whole window to be cleaned.

The decision was to go for secondary glazing.  Because of the internal tiling, and the large space outside the frame, the secondary glazing was put on the outside.  This required a frame to be made for the protective glazing.  The glazing had a ventilation slot at the bottom to allow slow circulation of air and avoid condensation on the outside.  This is the same concept as the isothermal glazing used in churches.  This installation used a minor variation in allowing circulation of air from the bottom only, instead of all around.

The work on repairing and cleaning was conducted at the same time as the framing was done.

The secondary glazing was attached in such a way that it can be removed for cleaning and decorative purposes.

The finished work shows no effect of the secondary glazing from the inside.  The pole for the washing line can be seen clearly. 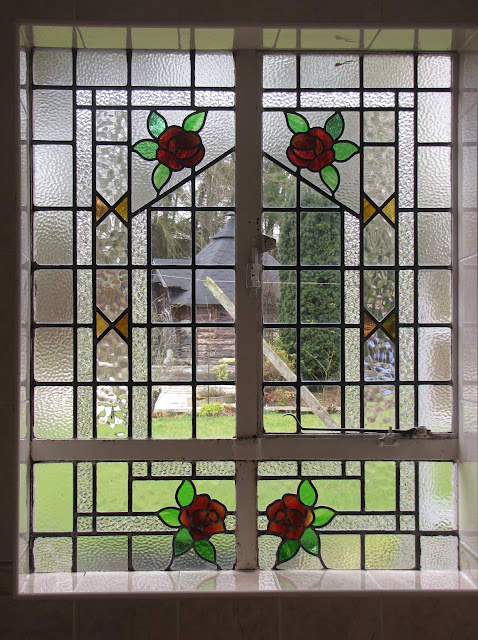 The outside of the house shows no significant difference with the secondary glazing in place. 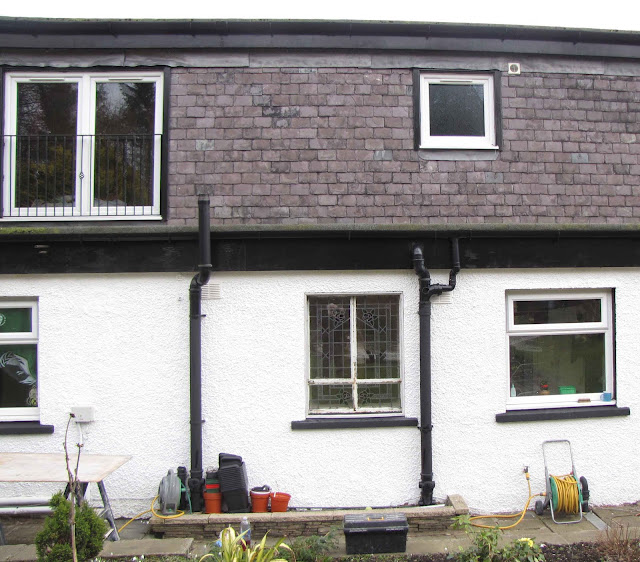 Posted by Stephen Richard at 07:00 No comments:

I was called out to look at a broken door panel by a landlord.  The flat is in one of the currently less wealthy parts of Glasgow. The request was for a repair or replacement. 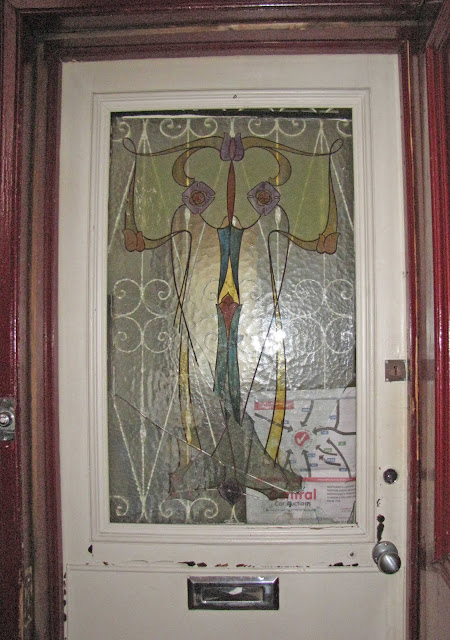 The painted glass was broken from the lock across the whole glass in several places.  The options were to make a copy or replace with plain glass.  The landlord decided that it was too expensive for a replacement copy and replaced the window with plain laminated glass.

This door shows that the area was once a prosperous area of the city during its industrial flourishing.  It is not a large flat, probably built in the period 1900-1915. The status of the area at the time it was built is also shown by the stair window that remains. 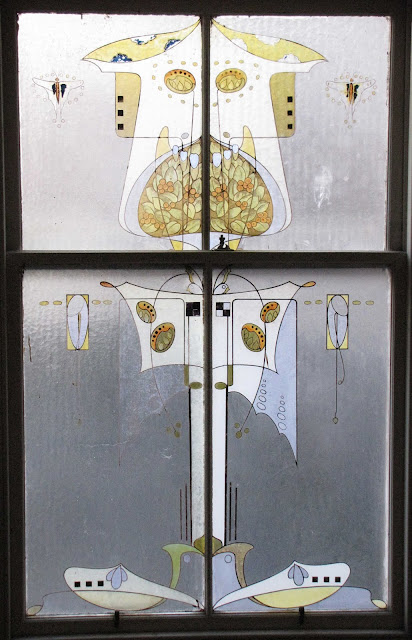 Although some parts of the window show the deterioration of the paint work, it is still in reasonable condition.  These windows are of a quality that deserves to be preserved, but because they are not in the grander parts of the city, they do not receive the grants to assist in their preservation that are available in those other areas.

This failure to recognise the glass heritage that remains in the poorer areas of the city will lead to the decrease in the variety of glass preserved from the great industrial period of Glasgow.
Posted by Stephen Richard at 07:00 No comments:

In trying to understand craft better, I have been reading a range of books and articles.  In one of these, David Pye* talks about workmanship instead of craft or craftmanship.

Some elements from this book have a resonance for me, and I trust others:

"Designers have only been able to exist by exploiting what workmen have evolved or invented." p.17

"Material in the raw is nothing much.  Only worked material has quality and pieces of worked material are made to show their quality by men [and women], or put together so that together they show a quality which singly they had not"  p.18

He talks about the quality of workmanship being judged by the soundeness and aesthetics ("comeliness") of the result. p30

"workmanship is the application of technique to making, by the exercise of care, judgement and dexterity."  p.51 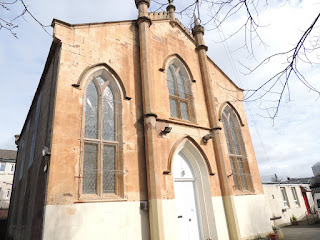 Money is now being collected to do a complete renovation of the building and it access to make it more suitable for the current purposes.  The building is listed by Historic Scotland, so an assessment of the work required was needed.  I was asked to provide information on the work required for the windows and some indicative costs for the application to Historic Scotland for grant money. 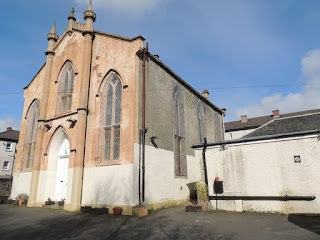 The central part of the building has been covered at the balcony level. 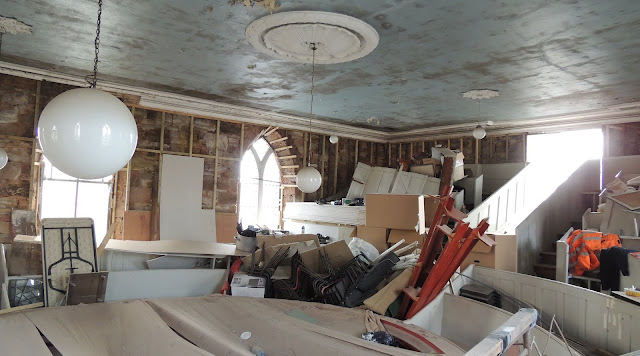 This area shows some of the worst of the damage caused by weather and lack of maintenance. 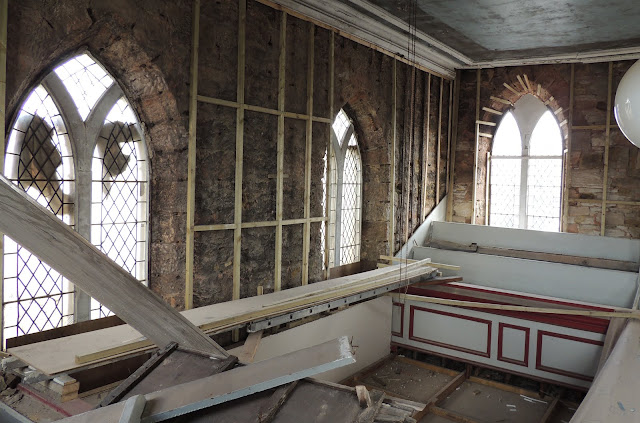 The work includes the need to replace much of the timber work behind the stone mullions. 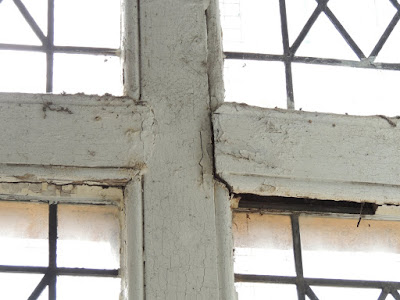 The external view of one of the windows shows the full extent of their height. Although they are protected by a wire mesh, there is visible damage to the upper portions and they are not as secure in the stone as is desirable.

A lot of work will be required to make the windows sound and divide it into two levels appropriate to the needs of the new religious community.  I do hope they will be able to get the funding and support needed.
Posted by Stephen Richard at 07:00 No comments: