Today we moved location. I was so focused on getting the task done, that I started in a room with little sound insulation between us and the artist next door. So we have moved to an area that will create less disturbance. But we made progress. All the major elements are laid out and a start was made on the grass and sky. 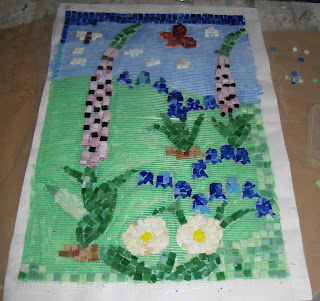 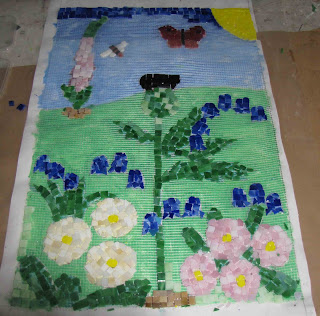 We got so involved that we were late in getting ready to go and forgot to take pictures of the people working on the panels. Still, on Friday everybody will be around so there will be a big group picture too.
Posted by Stephen Richard at 22:00 No comments:

Day three:
This was the largest group so far. All 10 appeared. Thanks for teaching assistants - Mrs Jamieson you know hwo you are. And Thanks for friends to help out at short notice - Thanks Angela.

Progress is being made: 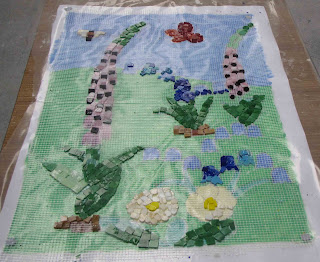 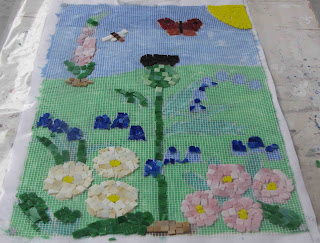 Some of the proud workers at the end of the day. 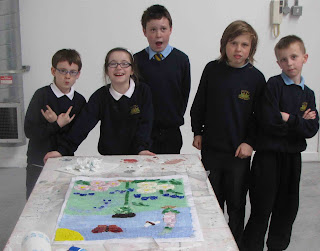 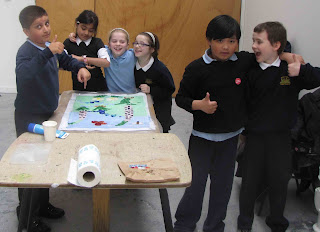 Of course someone had to get in on both photos!
Posted by Stephen Richard at 19:18 No comments:

So the school and I progressed a further step yesterday. Not as much got done today, as the students had more fun than work. Still progress has been made. You will see the progress is gradual but definite. 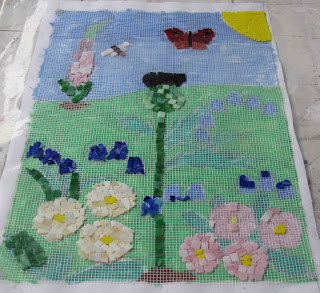 This is the proud group who worked on the above panel 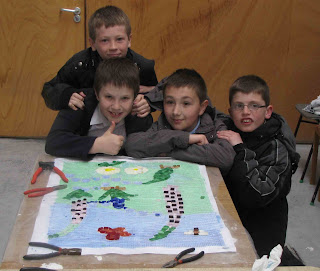 Panel two is progressing more quickly than the first, as you can see. 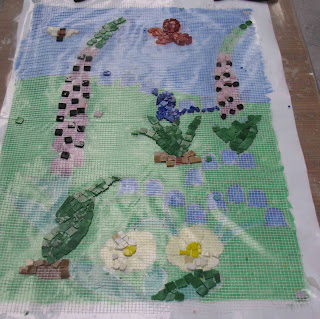 Was it because it was an all girl group? These are the people who did it. 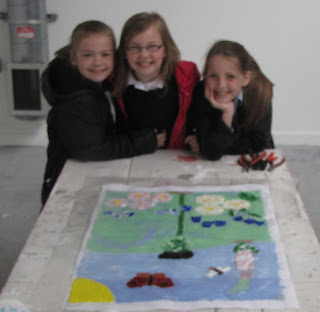 Posted by Stephen Richard at 18:31 No comments:

As my grand daughter was studying Roman mosaics among other things Roman in class, I thought it might be nice for the class to experience the technique of putting together a mosaic in the Roman style. However, things move so quickly in primary schools, that I found myself agreeing to do one on a spring theme.
The teacher decided on the flowers to be represented and set the class to work on drawing up the flowers both in a naturalistic and a graphic version. I was then to make a composition of these over two panels. Through a little persuasion, I was able to get sponsorship from Pearsons Glass, who donated sheet glass which Magda and I cut up into centimetre squares, knowing that about 7,500 would be needed for the two panels. The cut glass is shown above. Thanks again to Peter and Robert for agreeing and selecting the glass for me.
The composition was drawn to full scale, approved by the pupils and teacher. It was then covered in plastic and a grid put over to attach the glass with PVA glue. It will later be transferred to prepared boards and stuck down with adhesives and grout.
The class is divided into three so that about 10 come each afternoon. This will give each group the chance to see several stages in the progress of the mosaic construction. The picture below is panel one after the first day. 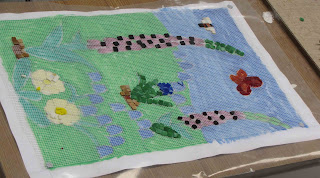 And this is panel 2 after the first day: 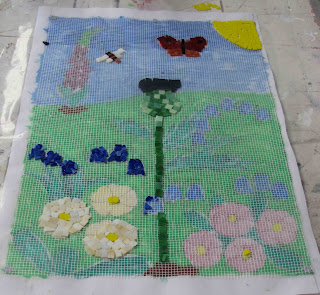 Posted by Stephen Richard at 22:29 No comments:

Back in the Studio

Today was my first back into the studio after three weeks away in Australia - Wedding (not mine - my neice's), camping in the Flinders Ranges, Visiting Kakado National Park and Elizabeth Gorge in the Northern Territory. It was so strange to see my unfinished projects still there waiting for me. The amount of post to open was large - unfortunately the bills equaled the income. More demands for estimates in impossible timescales. So the most I could do was to tidy up the admin stuff in preparation for a large delivery of glass tomorrow and then begin to finish the existing jobs and start some of the things I thought about on my trip.

As the saying goes, "I need a holiday to recover from my holiday"
Posted by Stephen Richard at 17:48 No comments: