While being at the house in Bathgate doing the removal and installation of the cloakroom window, I could not help but notice the glass in the front door. 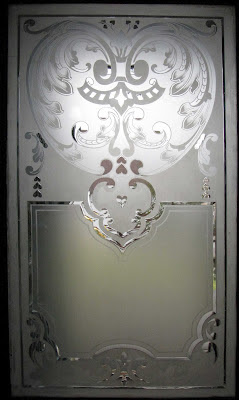 This is the first brilliant cut glass that I have seen (not that there are not others, of course) in a domestic front door.  Upon enquiry, it turns out that this building of three flats was built in the early 1920's by a local foundry owner.  It may be that the wealth available lead to the commissioning of this front door.

It is not only etched with hydrofluoric acid but also white acid (a combination of alkaline and acidic chemicals to give a more pale etched colour).  The white acid effect can be seen in the thin line surrounding the clear brilliant cut lines. 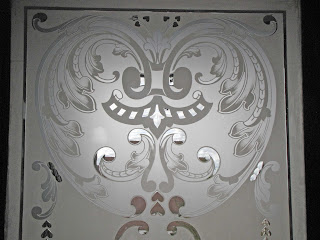 You can also see the effect of the white acid in the paler upper central area of the panel.  This shows the effects of the two acids clearly.  The chemical combination gets its name from the whiter appearance achieved with its use.  It is rarely used nowadays because of its heat-creating reactions and subsequent risk of explosion. 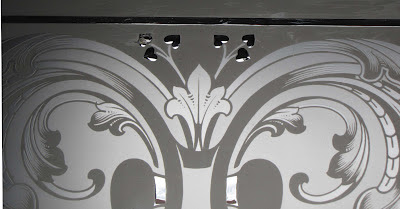 The brilliant cutting can be seen in the six heart-shaped petals at the top of the stylised acanthus leaves and above the fleur-de-lys emblem at their junction. 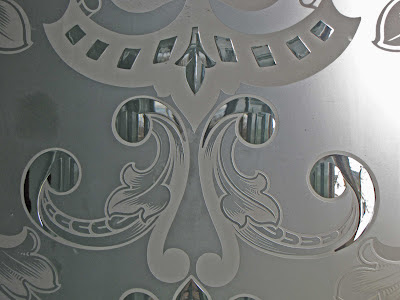 This lower section of the central panel shows the effect of the brilliant cutting.  The four "cartouches" shown here have lines at the curve, showing the use of different wheels to do the cutting.  The rectangles and circles are relatively easier to cut than the sweeping curves leading to the circles. 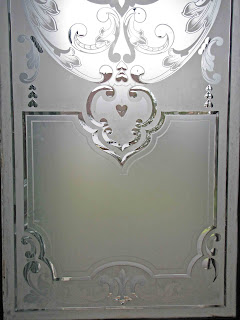 The bottom of the door panel is relatively plain, but contains some superb artistry in the brilliant cutting. 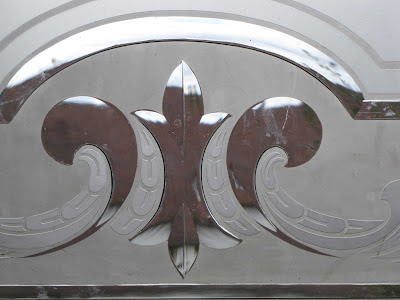 In this emblem at the bottom of the door, the cartouche is cut in one sweep of the wheel.  The inner detail is cut with two sweeps of the wheel for the outward flaring shapes and finally the points put in with a "V" shaped wheel. 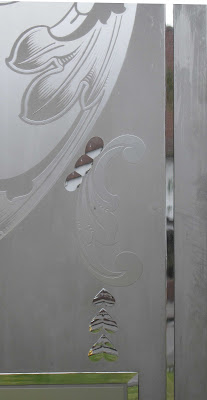 The side of the panel shows more of the skill of the cutters. Three linked olive shaped areas are cut and polished beside a group of faint cartouches.  Below is a group of three heart-shaped references to honesty seed pods.  But a simple and difficult feat is the straight lines cut all the way around the panel. 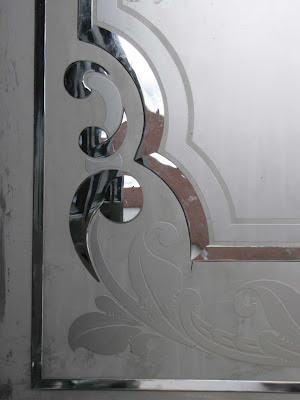 The corner again shows the work in creating both curved and straight lines.  They are all incorporated with the acid etched designs in an almost seamless manner.

My admiration for the skill involved in producing this door panel relates to the requirement that the lines and shapes are cut into the glass and then ground repeatedly with finer an finer grits until polished.  And there were no slips!  Secondly, the whole piece of glass (around 120 cm by 80 cm and 8 mm thick) was suspended and balanced by weights to enable the craftsman to manoeuvre the glass over the spinning wheels.

This work deserves to be at the very least listed as an important piece of work and at best incorporated into a museum setting as this work cannot now be reproduced as all the hand skills have been lost and the computer controlled brilliant cutting machines cannot reproduce the curves of this design.
Posted by Stephen Richard at 20:36 3 comments:

I am quietly proud of this repair.  The window was broken in several ways.  There was a considerable amount of glass broken so that it was not weather tight.  There were some very amateur repairs with glass that was too small and held in place with "sticky-backed plastic".  The tie wires were mostly broken.  There were a large number of broken solder joints.

All this meant that the panel had to be taken out of the opening and repaired on the bench.  It also made it easier to repair the complicated shapes.  However, as soon as it was inspected on the bench, it became clear the whole panel needed re-leading as most joints were broken.  The client agreed that this could be done, as there was going to be little additional expense. 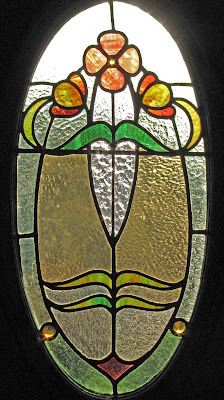 This photo was taken on a very sunny evening, so it washes out a lot of the intense red at the top of the panel.  I had to replace almost every transparent piece of glass and I am pleased that it is very difficult to tell which are the original and which the new.  I kept all the opalescent glass, as it forms a large part of the panel's character.  Where they were broken, I edge glued them together with Araldite 20/20 epoxy resin.

I think the outside looks really good now too. 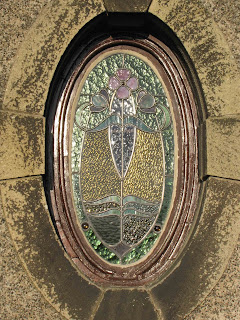 It sits in its stone casing to the left of the front door, reflecting back the light according to the textures that are on the inside of each piece.  Fortunately the client likes the result too.
Posted by Stephen Richard at 18:00 3 comments:

Bad things happen to glass when there are break-ins.  In this case, a plain window was broken through to get things in and out, but while there they broke a turn of the century acid etched door panel to get to an empty conservatory.  Then they took the family's van to transport the looted things away.

So, a couple of days later I get a call to come and have a look at what can be done to repair or replace the window as the insurance company is not sure how much it wants to pay for all the stolen goods and damaged glass - fortunately not much damage was done within the house.

The entry to the house has a very colourful painted, stained and leaded surround to the doorway. 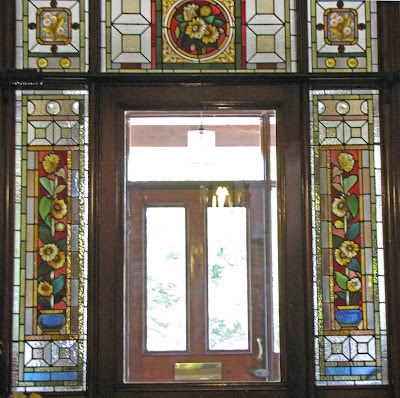 I did wonder if the clear door panel was once also leaded glass.  But no this was not the damage.

The hallway is cruciform in plan, and as I turned to the right, I saw another really nice entry to and from the side garden. 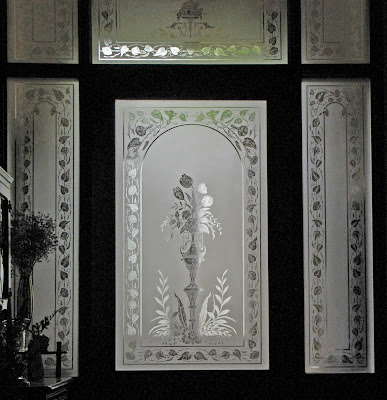 I could see almost immediately that this was not the door with the breakage, but I could not resist a closer look at the door. 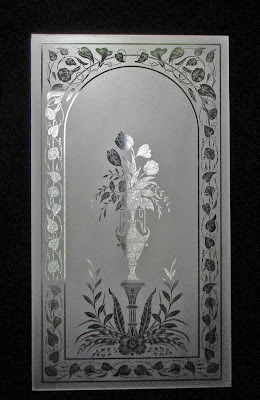 This is a very detailed piece of work of a very high standard and I was pleased to see that it had not been damaged.

The door I was there to look at was behind me on the left. 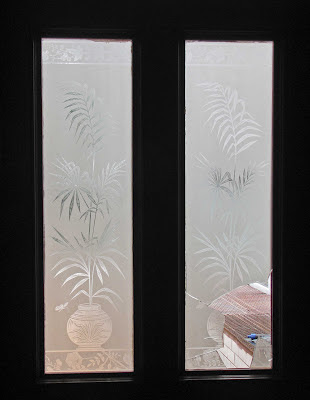 This was the door panel broken to see what was on the other side, as they did not even unlock the door, once the glass was broken and they could look through.  It must have taken a pretty big blow, as the glass is 8 mm thick.

In considering making a replacement, I was lucky.  Both panels are identical, not even mirror images.  So I could take a rubbing of the left panel to recreate the right panel. 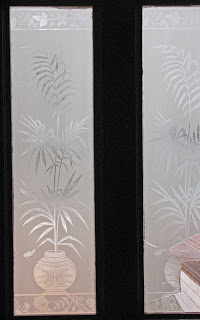 Some of the work on this panel is detailed, although more stylised than its opposite number.  The top of the panel has a band of vine leaves, which sits oddly with the bamboo below. 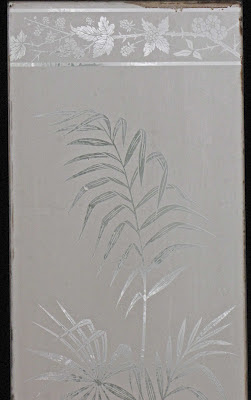 However there may be a connection as the door leads to a very large conservatory (or as we would now call it - greenhouse - with heating pipes for the plants on the staging and underfloor heating and vents for the general run of plants. 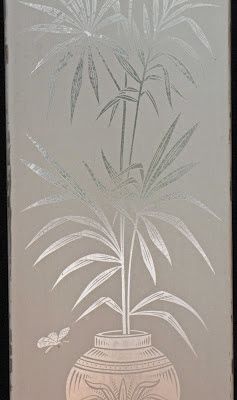 The Scottish traders may have brought back the Japanese symbolism of strength and endurance for the bamboo.  Then of course the fondness of a glass of claret on a winter's evening may have something to do with the vines.  But that is all speculation.

More to the point is the ability of the etched panel to reflect the colours on the other side of the door.  In this case, as the camera is point downward, the colour of the terracotta floor tiles is picked up to give a pinky orange glow. 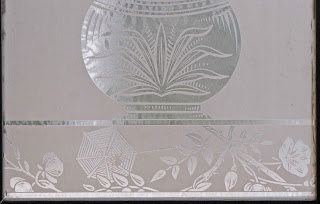 This glow disappears as you bend down and the line of sight is once again upwards.  Here on the bottom border are briar roses.  So the strength and endurance of the bamboo is surrounded by the temporary nature of the rose and dual nature of the vine and its product.  Again mere speculation.

I do enjoy the little bits of humour with the incorporation of the spiders web and the delicacy of the butterfly against the strength of the bamboo.

Now to satisfy the insurance company that this replacement panel needs to be done with the traditional French embossing method, rather than the cruder sandblasting, or even worse - they suggested a sandblasted replacement of both panels with a standard design.

Oh, yes.  After taking the rubbing, measurements, and photographs, I decided that the front door probably was also an acid etched one, rather than leaded.  It probably was lost like a lot of acid etched front doors by impact damage through the door slamming or vandalism.
Posted by Stephen Richard at 22:00 2 comments:

After Glasgow International I found myself involved in a number of projects relating to degree and end of year shows.  My interest in these has led me to neglect blogging.  I am out to make amends now.

A student from Shetland College got in contact - upon a recommendation from Cheryl Jamieson - to arrange a few days in the studio to investigate the incorporation of wire knitted in Shetland into glass fired in Glasgow.  This might be the most far travelled set of pieces for an end of year show - this year at least.

We started the week off with a visit to The Dhabba, an Indian restaurant near to where she was staying.  Discussion with the owner revealed that his mother came from the same village in India as the student stayed with with her former husband. Lots and lots of gossip was traded in between mouthfuls of  good food.  It was one of the most enjoyable evenings in an Indian restaurant I have ever had.

The next day work started with lots of tests. 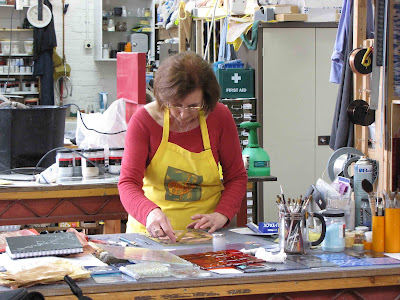 Translating work into a new medium is time consuming.  It turned out that she was relieved to be able to get a rest at last when five pm came around.

After three days of intensive work, I allowed a day off for shopping ( and a visit with her sister).

The piece I liked best was this one: 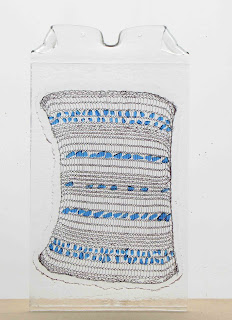 I think it is because it resembles a knitted sweater.  The folds in the glass are due to the kiln posts interfering with the glass as it slumped down from the supports to the underlying glass and knitted wire.  This was done to avoid the excessive bubbles some of the other pieces had even when supported at the corners with pieces of glass to let the air out during the bubble squeeze.

Other pieces of her work can be seen in the Shetland College end of year show.
Posted by Stephen Richard at 21:22 No comments: