I have been conducting some recent experiments with float glass strips.  The intention was to play with devitrification.

I placed the strips randomly tin or air side down.  In the first they were shingled, and then fused. In the second, they were shaped first then fused.  The first went into a self-made ceramic mould.

The second I decided to make into a large tray.  The mould for this, as I had no suitable mould of the correct size, became cut kiln shelves arranged in a parallogram and covered with thinfire.

I fired at 100C per hour and watched periodically from 600C top 720C.  I decided to stop the firing after 10 minutes at 720C.  This was not an entirely successful experiment, as only a little devitrification shows on the first and none on the second tray.  Still, I obtained two interesting vessels, which encourages me to continue the experimentation.
Posted by Stephen Richard at 21:22 No comments:

Today I had the opportunity to view the "in-progress" restoration of a large Arts and Crafts house in central Scotland.  The house has approximately 150 windows I am told by the owner. If accepted, I am to make and install 19 window panels by the time of the visit of the Mackintosh Society on 6th June.


This last image shows the extensive work required to remove later additions to get back to the foot print of the original house.  The windows to be replaced are in these gaps.

Apologies for the rain drops; it was raining very hard on the day of the visit.  I hope to show some of the tremendous work being done on the house to bring it back toward the original decorative state.  My contribution will be preparing windows of this pattern. 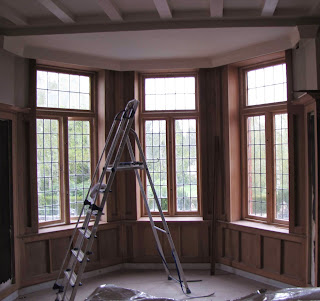 A very nice bathroom door panel was in a poor state when I arrived.  It was lose and floppy with many broken joints.  It had been repaired in two ways - broken glass had been replaced with unsympathetic textures in the clear, and a lot of silicone had been spread around to try to hold the whole together.

The door had been dipped and it is possible the glass remained in place during this treatment.  But however it had occurred, this panel faced the prospect of being replaced with a modern textured glass sheet, or to be restored.  After some discussion the owners agreed that it was a very nice example of late Arts Nouveau stained glass work and should be restored.

A price was agreed.  The panel was removed - almost completely falling apart in the process - and taken to the studio.  Closer examination revealed that all the glass was held in the cames by silicone.  Further it was discovered as we began to take it apart, the glass cutting had been very lose - i.e., poor.  The lead barely covered the edges of much of the glass.  A lot of the clear granite textured glass was broken and a number of pieces had been replaced by both badly fitting and inappropriately textured glass.

After consideration, it was decided to replace all the clear granite with a modern equivalent.  All the coloured glass was retained, as most was in tact, and of course much would not be possible to replicate.  A chemical silicone remover worked really well to enable the silicone to be removed without damage to the glass.  All the lead came was replaced by the same sizes of modern came.  This was more work that I had expected, but was rewarded in part by the comment of an expert on Arts Nouveau that happened by the studio during the re-buliding that it was a 1914 window.  How he could date this so accurately, I do not understand, in spite of his explanations. 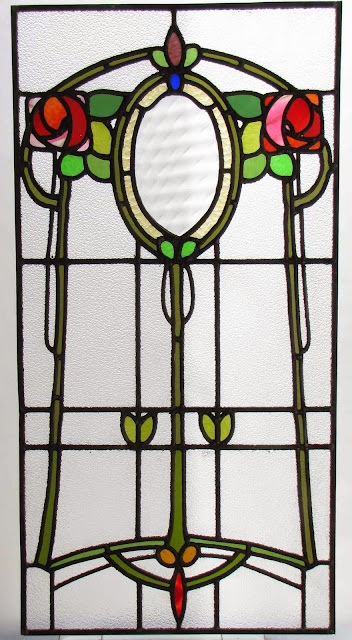 This was the window after reconstruction.  New clear glass except the central piece, new leads and new cement as it sat in the studio window before delivery. 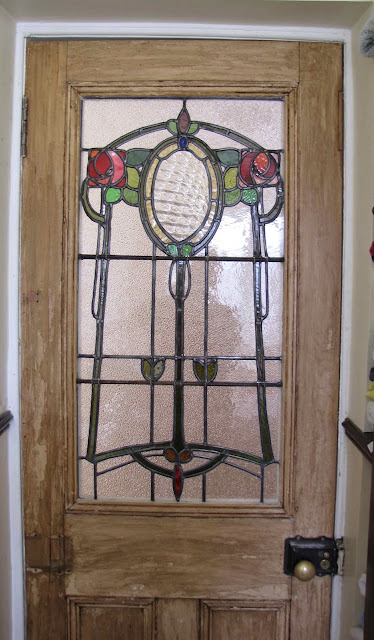 This is the appearance of the window in the door from the interior of the bathroom with the natural light from the hallway shining through. 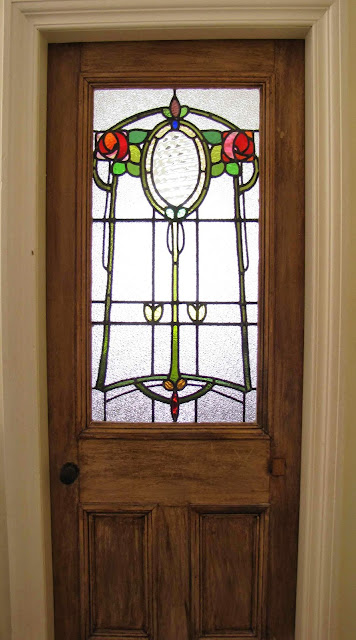 This is the door from the outside. 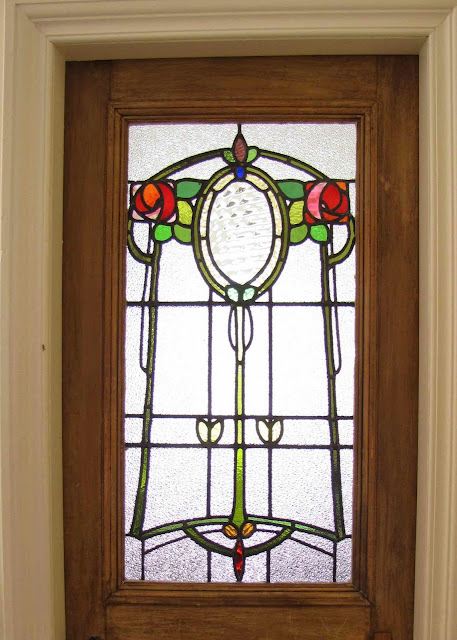 A close-up of the installed panel.  This shows it is very hansome, even though some of the greens are washed out in the photograph.


I am very pleased with the result we achieved.  The older sister is too.  She says that now her younger sister can't peer through the broken glass while others are in the bathroom.

Posted by Stephen Richard at 21:11 No comments: