The Wasps Open Studios was held this past weekend.

My proposal for a large piece to attract attention was accepted by the organisers. This followed on from my reaction to a series of TV programmes called "Who Do You Think You Are?". In this various "celebrities" are invited to find out about their ancestors. Normally, the line is traced through the male line. This began to irritate me.

So I made the proposal to establish an eight-foot high pyramid called Woman Tree instead of a family tree. 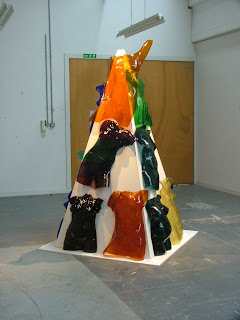 This view shows the view from the entrance of a number of body casts which show the female figure at various ages and states. Three of the sides show a variety of forms. 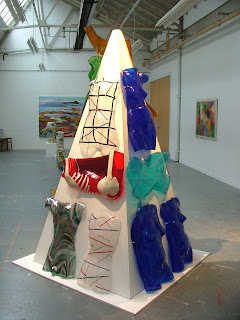 The fourth side begins at the bottom with a male figure and continues with marked and damaged figures attempting to show a contrast between the growth of the three female sides and the conflict of the "male" side.

Unfortunately I was so busy during the weekend, I was unable gather/overhear comments (if any) on the concept and display.

Fortunately though, I was busy in the studio. There was lots of conversation ranging from how do you do that? does glass flow? to more involved discussions. One of these was about the use of glass as a decoration fused to ceramics. The person accepted that the glass would be crazed as in her current experiments. She was really pleased to find my studio as a source of cullet that she could obtain to break down into small particles.

Another discussion was with a student at one of the local colleges on the Saturday. On Sunday, she brought another student with her to show the studio and its resources. Me being one of those resources. (I really should start a consultancy!). Students from the other college didn't make themselves known to me or didn't come.

One of the most rewarding things though, was that four artists whose work I admire and respect purchased some of my bowls and platters.

So it was a rewarding weekend (from which I am still recovering) in terms of discussions, contacts and sales. It was much better than the three or four previous open studio weekends.

Posted by Stephen Richard at 20:32