Now I have another good reason to show people round the studio. A couple came in to look at some bowls and bought one. While they were there and expressing interest in what I did, they saw an open kiln with a body mould there that I had not put away after forming some jewellery for a fashion designer on it. 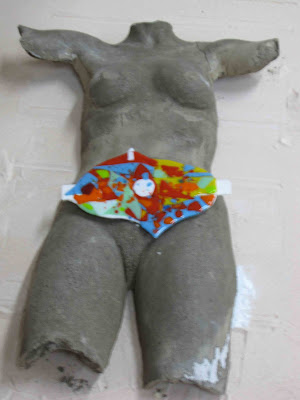 They immediately liked it, saying that is what our daughter would really like. They asked for an indicative price, and asked to bring their daughter in to see. She came, she saw, she liked and she paid a deposit.

Now I have to prepare a strong vermiculite mould that will be mounted on the wall. I think I will need to seal the back at the very least. If the sculpture gets the attention that the figures do at Angkor Wat, there will be enough oils spread on the front to keep it in good condition.

Posted by Stephen Richard at 07:30