This project began about three years ago. I was first brought in by the estate agents who were selling the house. The buyer had asked about the state of the stained glass and porch. The porch had visibly subsided and the window panel next to the door was in a very poor state. The panel was buckled, many of the joints were broken and the central painted piece was about to drop out.
I advised on the cost of making the repairs and advised that the panel should be taken out before the removal people began taking things out and moving other things in as the door post would inevitably be knocked with the moving of the furniture. I felt the painted panel was nearly ready to fall, which would have cost a great deal more to repair as well as the general repairs.
All parties agreed. However this was at the beginning of the housing and then financial crises. So I have been storing the panel for all this time. The new owners have at last sold their other house and asked for the panel to be prepared for installation. 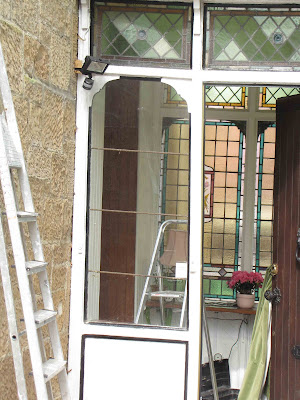 As you can see there is a considerable drop from the wall to the door post. At some point in the future the porch will have to be rebuilt and therefore squared up. My recommendation was to build the central portion of the window as a proper rectangle and have the sacrificial border shaped to fit the opening. The owner agreed and I took a template of the irregular opening. 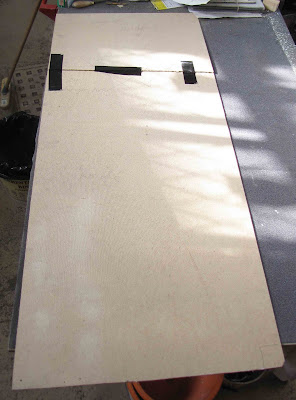 The angle on the bottom of the template is as skewed as it looks in this photograph. The existing panel was completely taken apart and the new leading pattern established with the wedges of sacrificial border. 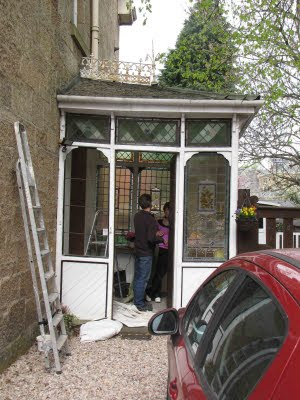 Arrival and preparation for installation of the re-leaded and repaired window. 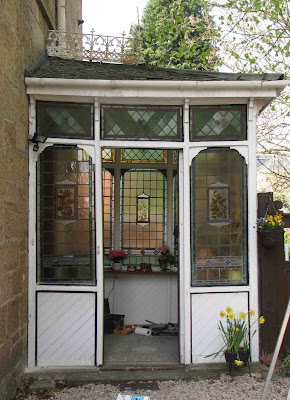 A few hours later the window is installed in its old position in the still subsided porch. 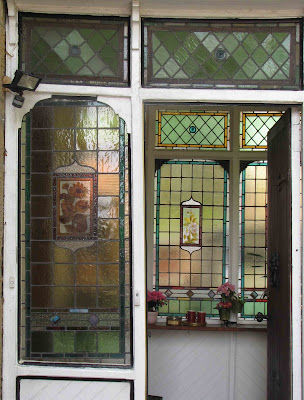 This shows the newly installed window at the entrance.

The view from the inside
The client telephoned me a week later saying how delighted they were with the window. "It seems complete now. I didn't realise how much difference it would make to have it back in place."
Now I can wait until the porch is rebuilt for the next request for re-setting it into its new position. All that will need to be done is to remove the wedge-shaped borders and put the new ones on to make it fit the proper rectangular opening.
Posted by Stephen Richard at 21:24

I have just completed the stained, painted and leaded front door to replace the pre-existing dark timber cladding.
http://verrier-glass.blogspot.com/2011/07/porch-door.html