Moon and Stars at Night

Every studio has a large part of its work from restoration.

This recent one came about when the removal people broke the bottom two thirds of this panel. The owners wanted to retain it for sentimental reasons, but needed it expanded to fit a new location. Their initial suggestion was to continue lines in the original to fill out to the required area. After discussion we all agreed that it was better to keep the original conception and "frame" it with a glass that did not compete with the original. 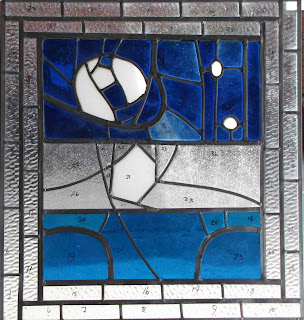 This shows the panel before cementing - the numbers are still there. The expansion is the clear textured glass around the perimeter. The bottom blue and most of the textured centre were broken. The top was in tact. Only three of the bottom blue were unbroken and only one of the clear - the white centre.
The original maker - maybe in the 1960's or 70's - used quality handmade glass, and the white is flashed Desag. I continued the restoration by using handmade glass for the substitutes/replacements to keep some of the original character.
The owners do not know what the inspiration for the panel might have been, but I like to think of it as water, sky and night. The blue base could stand in for water. The central panel consists of vertically oriented seedy glass, making me think of rain, with a pale sun. The top is a dark blue which with the white shapes lead me to think of the moon and stars on a showery night. So this for me is "Moon and Stars at Night"
Posted by Stephen Richard at 22:46