Back in August I reported on the early stages of the restoration of the wheel window and three small "supporting" lights.

Now that the building is nearing its completion, it was time to install the big window into its new home. The stone has been re-erected, with the location markings still visible at close quarters. Installing into stone channels is always more concerning, as the panels have to be big enough to stay in the stone, but not so big as to be impossible to put in. I got someone to help with the installation, both to give assistance and to keep me calm.

The first day, we could only install the bottom half of the wheel window, as the scissors lift was in constant use by the painters and no other scaffolding could be put up there while the painters were at work. So after four hours we left, with the promise that the lift would be in place for us in the morning.

Morning came, but the lift was not there. There was no one qualified to drive it either. We did a few odd jobs for an hour or so, and then the lift became available. The top half of the window fitted well with little difficulty. We finished it up and went for lunch.

The difficult part came with the little windows. It seems like there is less room for manoeuvre. The stone was badly eroded in some places also. So, out we went to buy a 110 volt angle grinder as the site's one had gone missing. Still it will be a good tool in the future. It was an essential one for this installation, as we had to cut one new channel and deepen all the others. Four hours after we started on these three little windows, we began to seal them with the sand mastic. I finished on the inside first and was able to stand back and admire.

Fortunately, the other workmen on the site also admired the work. But most importantly the architect approved the work. Very important for me, as it appears he initially preferred another person for the job.

This is the completed installation of the main window and its three supporting windows. 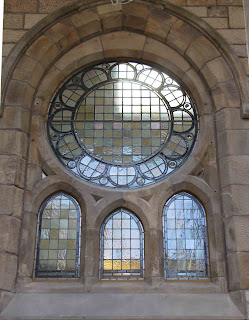 The outside of the window from below 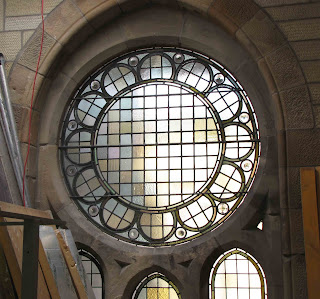 The window from the inside staircase
Posted by Stephen Richard at 22:06

Very nice.I am curious as to what the renovation involved.
Ed Hroncich

The whole of the windows needed to be re-leaded. Both because of the wear and tear and the damage the builders did in taking them out. This in spite of me telling the site manager that I needed to take them out to reduce the damage. The large circular window was full of breaks at the edges of the solder joints, and so very floppy.
Numerous pieces of glass had to be replaced (about 25%), especially around the perimeter.
I also found that even though the builders used the same stones and replaced them carefully, the dimensions of the opening changed enough that the raggles had to be cut deeper to accept the glass.