In the autumn I was asked to provide a chandelier for a large hallway. The principle was to have repeating features that would break up the light from the central hanging.
I made a drawing and a few samples of the pieces to be incorporated. This was approved.
Before Christmas I delivered the finished piece. It consists of two polished stainless steel rings suspended by chains from a central lighting point and several hundred pieces of cast glass of different sizes. 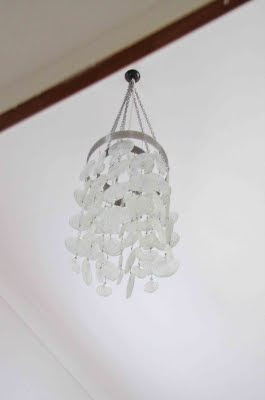 Recently I was able to see the piece installed. It is not immediately obvious upon entry to the house, as there is a landing immediately above the entry. But it is revealed as you move into the house and happen to look upwards. 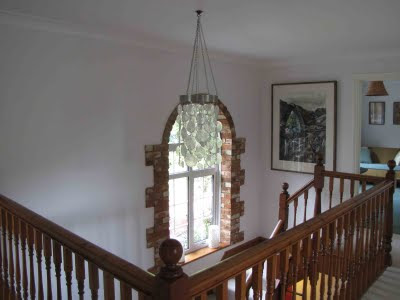 And as you move up the stairway, the chandelier becomes more obvious both in size and appearance. 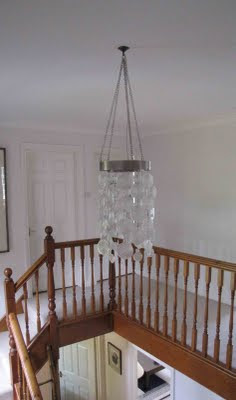 It stands out - although only of clear glass - whether against the daylight or as here within the stairwell. 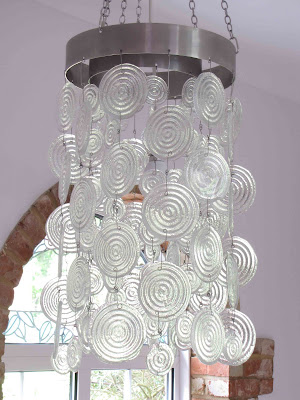 The individually cast pieces of glass break up the light from the light source as can be seen from the above photo.
Each piece is cast with linking wires to attach all the pieces together. Each column of glass ends with a piece having only one link. The inner ring of glass pieces are of a smaller diameter (ca. 35mm dia.) than the outer ones (ca. 50mm dia.) to help fill the spaces that would otherwise be left if all pieces were of the same size.
It is not a surprise - with glass of 6mm thickness and diameters up to 50mm - that this is a heavy piece. Bolts fasten the central hanging point to the beams in the ceiling as is advisable for any large chandelier.
Posted by Stephen Richard at 17:05

Rhona's hall makes it look so small! Looks good though!