A while back a client was given an old panel by a friend to enliven their new house. 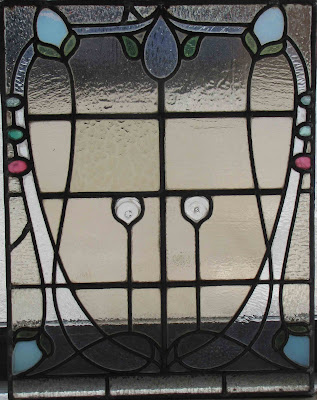 As you can see there is some interesting and no longer available vaseline glass included in the panel. The varying light between the bottom and the top shows some of the difference in colour caused by the level of light striking the glass. It is also a better example of arts nouveau than many and so seemed to be worth while keeping.

These same people who gifted the panel recommended me as a person who could arrange the mechanisms to hang the panel. The client brought the panel to me and we discussed the proposal to hang this in the door. I was unhappy about hanging a panel in a door for reasons of safety of the panel and of the clients.

I also was unsure of how the size of the panel related to the size of the door and arranged to go to their house to get a better idea of what was being proposed. The door is considerably larger than the panel and of different proportions.

So I said that the minimum required to keep the panel and people safe was to mount the existing panel in steel bars which would be fixed to the sides of the door. This wiould give two strong horizontal lines across the door opening. The client (and certainly not me) was not happy with this. So I quickly went on to say that the panel could be remade into a larger one for the door, removing the deep flemish glass that existed. This was difficult to envisage, so I agreed to devise a setting (for a fee which would be incorporated into the whole cost if they agreed) for the panel and bring it to them for approval. 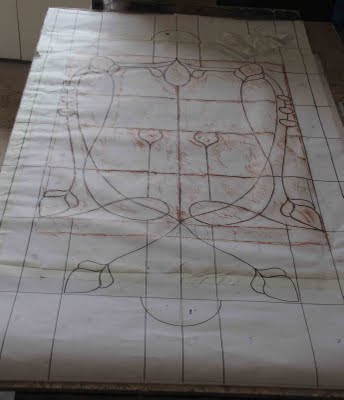 In the end, I developed a full size cartoon which I took to them and placed in the door for them to consider. As the proportions of the two were so different, I needed some way of lengthening the image contained in the panel. This extension needed to be sympathetic with the original. My decision was to extend the acorn shaped buds at the bottom and add two formal elements - the half circles - at the top and bottom to draw the whole together. It also provided a "base" or cradle at the bottom and gives an overall oval appearance.

The image was approved and after some discussion about colours of glass, light loss and other aesthetic matters, a price was agreed. 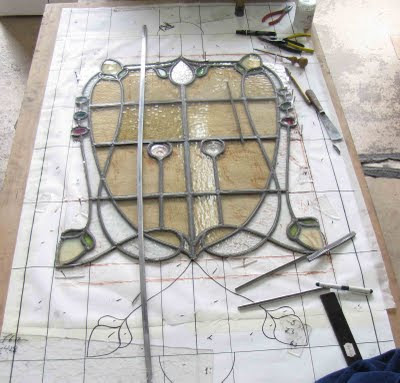 The disassembly began. I removed the perimeter glass so the panel would not have an appearance of being inserted whole into the surrounding glass. Various repairs were made and decisions taken on the placing of the grid lines. The cartoon you see here was modified from the one shown to the clients in the detail of where the verticals and horizontals were placed.

The glass was selected to match as nearly as possible to the existing glass where relevant, and clear glass was chosen to surround the main image. 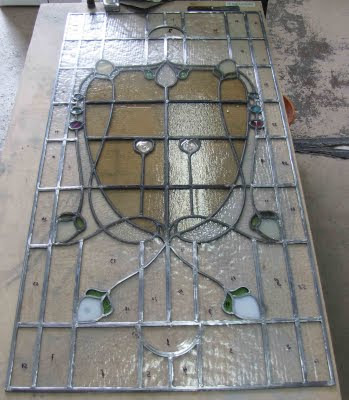 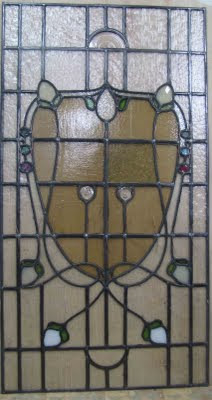 Finally, it was cemented and had its ties for the glazing bars attached. After some hesitation I went for two instead of four glazing bars. This was on the grounds that as a laminated glass sheet was to be placed on the outside, the two bars would be enough to protect the glass from bowing inwards if the door happened to slam into the wall. 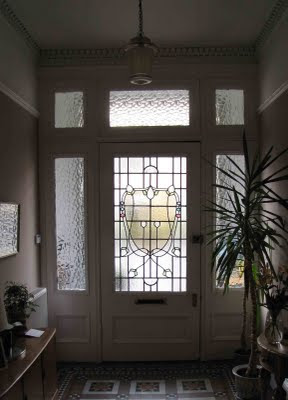 The finished panel installed. I think the door fits well with the terrazzo tiling of the hallway. 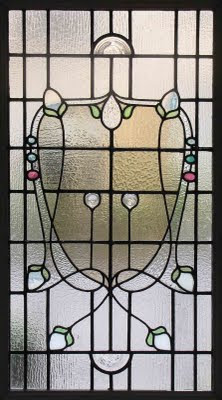 Although the panel is a large one - 1140 by 850 mm - it does not appear to be out of place in scale. As soon as this was installed, the client began to think of how they could deal with the remainder of the large flemish glass. That of course, will be when funds are again available.
Posted by Stephen Richard at 08:12

Wonderful job. The completed window looks lovely in the door. Thanks for sharing the step-by-step process!