In Glasgow and throughout Scotland - and possibly many other areas - etched glass front doors and stair windows were very popular in the mid nineteenth century. These were made on plate glass of around 8 mm thick which have proved to be pretty strong, as many of them still exist. However accidents occur, or as in this case someone threw an object which hit the glass with enough force to break it. 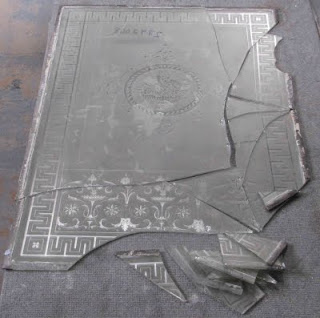 When it came into my hands - because I use traditional techniques rather than sandblasting - it had already been removed by a firm of glaziers who did more damage to it in getting it out. They were not aware initially of the screws that held the mouldings to the door and so damaged the moulding and more of the glass. Such is life. 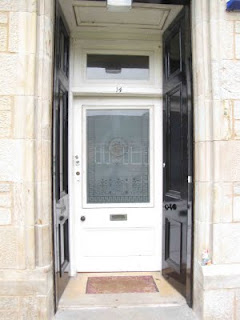 This image shows the front door with the glass installed. If you wish to find out about the process you can go to this section of the blog. 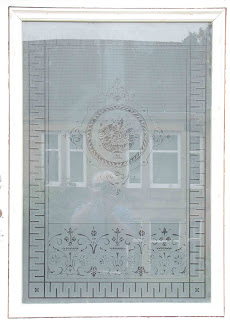 The smooth reflective nature of the glass from the outside is shown in this picture. It also shows the privacy generated, as it is not possible to see what is happening inside, even at this close an approach. The apparently clear portions are subtly textured by the acid process that you can only see colours through those areas. 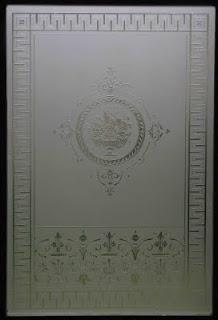 From the inside you notice the amount of light that is transmitted. You can see how the glass reacts to the colours outside with the view against the sky at the top having little contrast, the centre against the houses opposite having strong contrast, and at the bottom showing the green of the grass outside. The etched parts become the dark positive on the grey/white of the ground glass.

The following two images show the detail of the centre and bottom of the door panel. 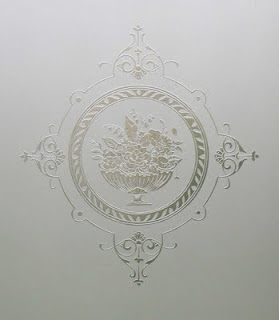 This has been prepared on laminated glass which is a security glass. If in the future there is an accident, the interlayer will hold the glass together and prevent any entry through the glass or injury to anyone from falling or protruding glass.
Posted by Stephen Richard at 08:32