A recent tour took me to Aachen where I visited the cathedral (Dom).  This is the most important church for the Carolingian Empire as this is where the Kings were crowned.  The central domed part of the cathedral is the original structure (at least as original as it can be after the destructions of the mid 20th century).  The other parts are additions at different times.  The walk way between the central part of the building and the tower are used when the important artefacts are displayed to the public.
Although the cathedral is near the summit of the steep hill, it is surrounded by the city and ancient town.  You get glimpses of it from various points.


The cathedral is surrounded by numerous buildings, some of which are part of the ecclesiastical property, such as the treasury.  This is now a museum and repository of the most important artefacts of the cathedral.
The traditional approach to the cathedral is through the gates at the side of the Treasury.


The tourist entrance of course is at the side of the tower.  Next to the entrance is a window with unusual stone work.  It seems to represent a sword or a staff lying on its side.  It forms the entrance to a side chapel of significant size that can be seen in front of the tower in the general view of the cathedral. 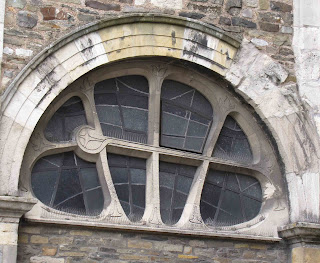 The surroundings of this window and the one above the tourist entrance show the effects of weaponry upon the side of the building.

The interior is massive, both in terms of its height and its columns.  It is highly decorated with lavish use of gold leaf, and paintings. 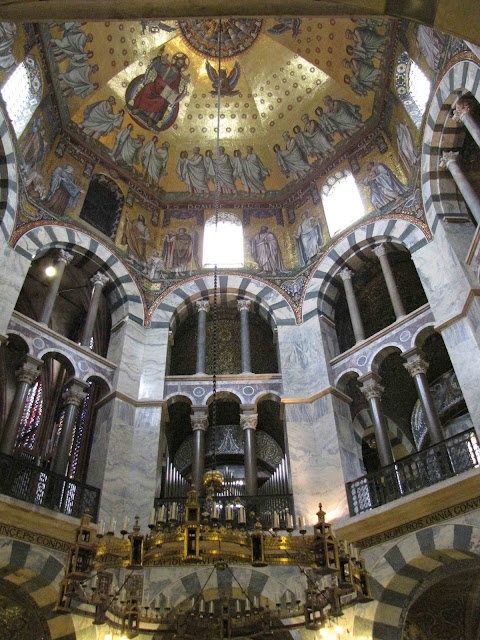 Of course you must remember this is a re-creation of the dome as the shelling of the allies caused the rooves of the cathedral to collapse.  However, a different approach was taken with the windows.  They are as in many German churches, 20th century windows.

The windows of Aachen cathedral are largely colourful grisaille-like windows, with central narrative windows.  The image below is an example from the left central portion of the nave.

The sides of the nave are richly coloured, but still allows a lot of light into the church because of the extreme height of the windows.


The chapel at the left side of the tower entrance contains a number of narrative windows, but only one of them can be seen through the glassed in restrictions.  This window seems to contain a number of images from Christ's young life.

This certainly is one of the great cathedrals, and if you are in western Germany, it is worthwhile to visit.

Posted by Stephen Richard at 12:00

Aachen Cathedral is one of the oldest standing churches located at the westernmost modern city Aachen in Germany was built in 805 AD, one of the most famous cathedrals in Carolingian Europe.

What an interesting blog, introduced by a thought-provoking photo. The unusual wall painting of the dwellings is also a strangely modern interpretation. Something like this hieroglyphic view of a park by Swiss painter Paul Klee, http://EN.WahooArt.com/A55A04/w.nsf/OPRA/BRUE-8LT475.
The image can be seen at wahooart.com who can supply you with a canvas print of it.