Window in a Listed Building, 2

Now that the window is in the studio, a really good assessment can be made. This is the bottom panel with the missing portrait. Among the other jobs on this window is to research and create an image of a woman in period costume facing the male figure. 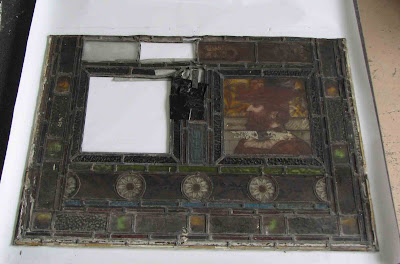 This image shows the male figure in transmitted light. You can see from this image how corroded the tracing lines have become. The shading is better preserved. This makes it obvious that the image was created using tracing and shading paints, a few enamels, and stain. 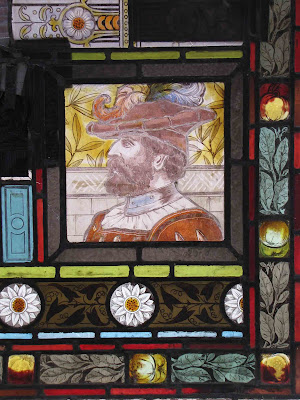 This image shows the male figure in reflected light. This makes clear not only how dirty the panels is, but also how the paint corrosion has mace the tracing lines pale rather than strong and dark. This is a characteristic of the painting done in Glasgow at the time. There was a need to produce stained glass windows quickly to meet the demand. So - it is speculated - the practice of adding more borax to the paint mix was brought from the Morris studios to Scottish practice.

By the turn of the century this problem had been recognised and many efforts were made to find a solution. Oscar Patterson even went so far as to avoid using paint whenever possible. He created fine images by etching and grinding the surfaces. The results are often difficult to distinguish from painted images. 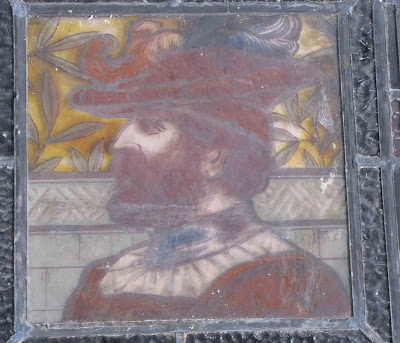 This image again shows the dirt encrusted surfaces. In this case the inside of the window shows a build up of dirt on an apparently sound leading structure. 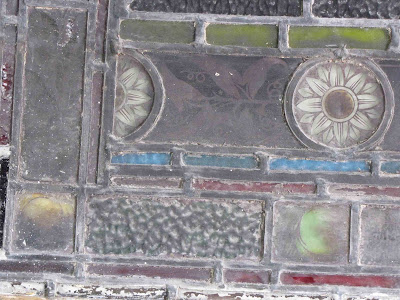 However, much of the panel is in need of re-leading as a result of damage over the years. There have been low cost repairs - inserting clear pieces of glass in various places around the window, for example. There are a number of breaks on the borders, and throughout the panels. 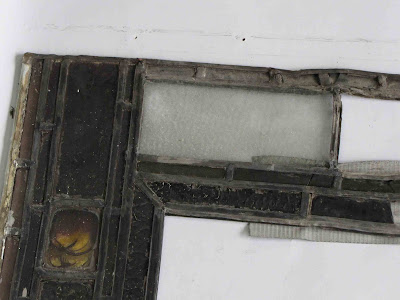 The superficially sound lead is extremely soft, with very thin inner and outer leaves. There are a number of broken solder joints, and the lead light cement is failing in places. 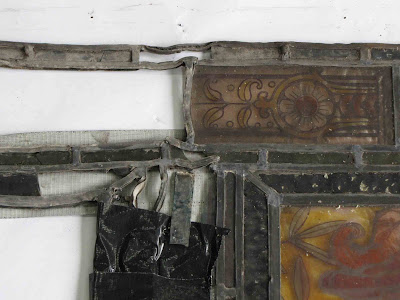 The decision has been taken that the whole will have to be re-leaded to ensure that the window lasts for another century and a half.


The previous entries in this series can be found at:
http://verrier-glass.blogspot.com/2009/06/window-in-listed-building-1.html