Last Weekend I was involved in the 50+ Show to help promote Craft Scotland.  This was a last minute effort as the promoters only offered the space to Craft Scotland about 6 weeks before the show.  Selection was a hurried affair and with some being selected dropping out before the three people were selected.

When we arrived, I was surprised to find that we did not have a shell stand, just a space.  However we all set up with the materials we had.  This was the set up prior to opening on Friday. 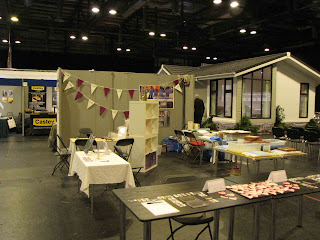 The three crafts represented were paper making (Pulp), jewellery (Lauracet Designs) and glass (Verrier).  We all offered some hands on making of a basic kind. 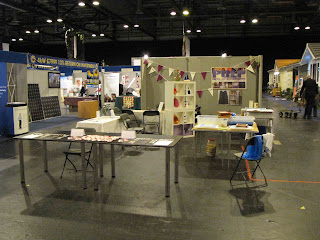 The first day for me was a blur from about 11:30 when people began taking up my offer of a free basic introduction to stained glass through making copper foiled angels or Christmas trees.  The degree of activity can be noted by the fact that I got to start my lunch after the close of the show at 5:00.  I was better organised on Saturday, but still finished my lunch at 5:00.

I am not sure how much Craft Scotland got out of the show, as we all were busy and not really able to promote the sponsoring organisation as much as we should have.  The staff of Craft Scotland were in Philadelphia at a show promoting Scottish craft and the Board member who was to have come on Saturday was ill.

It was gratifying to hear some of the workshop participants say to one another that "this was the best part of the show."  I am not sure how many people will be coming to my classes and workshops as a result, but I enjoyed the process, although very busy.

Posted by Stephen Richard at 08:15