I have now competed, at the third visit, a series of repairs for a flat in the area where I live. This is a development of about 10 streets done from 1898 to 1912. This particular flat was completed about 1904. All the flats in the older parts of Hyndland have variations of stylised art noveau stained glass. The Wikipedia entry gives a variety of sources. More stained glass survives in some flats than in others.

The image here is of the bathroom entry. The fanlight is approximately 1220mm wide and just over 650mm high. It is stabilised by two vertical tie bars only, but even after a century is still stable. It required the removal of varnish and paint in addition to years of grime.

The door and side light below it was in less good condition. The door panel had to be taken out to the studio to have broken leads replaced and the whole re-cemented. When replacing, a series of blocks had to be added to keep the panel from shaking loose again. The panel is inserted into a slot in one side of the door and then moved back into a shallower slot on the other side. I had to add blocks to the lock side of the door to keep the panel stable. Then add the putty and tie bars to keep the whole stable. In the picture you can see the two bars. There is not a bar crossing the amber flower shape, which makes it a little weaker, but definitely more pleasant to look at. 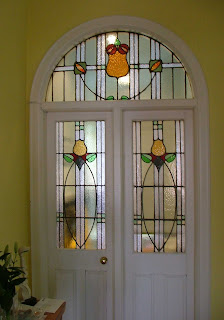 The other repair was to the door. This is a design that is a combination of two. The original is in the three upper lights of the door. The main panel is taken from the design of other flats in the area. The central emblem may be original, as significantly older glass is used there than in the surrounding area. In any case, they were not originally together. But I repaired the main panel and re-inserted it with a laminated sheet in front for security. 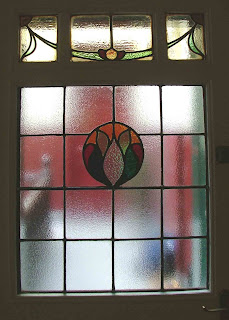 I enjoy these "low grade" jobs because it keeps the traditional glass in the buildings for which they were originally designed. They require a high level of patience and considerable skill to keep things as near to the originals as possible, and to keep the client pleased with what they have. Most do not want cracks anywhere, although I often try to talk them into glueing pieces where the character of the broken glass cannot be matched with modern pieces.
Posted by Stephen Richard at 20:23