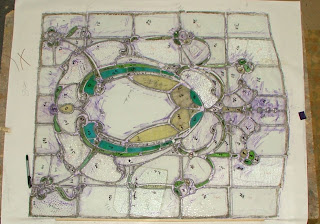 This is the beginning of what will be a long restoration job. It is from a front door of a large turn of the century (19th) detached house with its gardens. I took on the job, knowing that it was in a poor state with a number of broken joints, tie wires broken, glass pieces broken, etc. I could see it had been repaired before.

When I got it to the workbench and began to investigate it in detail, it became apparent that it had been repaired at least twice. It had a number of additional lead lines to make the repairs of breaks on one side look symmetrical. This had been done enough times to obscure the original design.

I discussed with the client the possibility of a complete re-leading and attempting to bring the window back toward its original state, gluing where no similar glass was available. Now that it is totally apart, the full extent of restoration work becomes apparent. Not all the broken glass can be glued back together, as some of it has been grozed to enable the new lead came to be inserted between the pieces. The window was much heavier than it originally was, as the amount of solder used to fill gaps and compensate for missing pieces of glass was alarming.

This work will continue to appear in my writings for a while. I have to glue what I can after cleaning, try to find matching or compatible glass, and then at last lead up with the appropriate widths of came.

It is a relief to have gotten this far.

Posted by Stephen Richard at 21:20