Not all community projects have a fully completed outcome. The project at Auchinlech, an ex-mining community in Ayrshire, was great fun. The people were enthusiastic. They learned a skill, and taught me a lot too. The project combined developing their skills through preparing a small panel for themselves (after the big project was finished), and designing and making a large panel for the centre. The photo below shows one of the early sessions when I was demonstrating the cutting of glass. 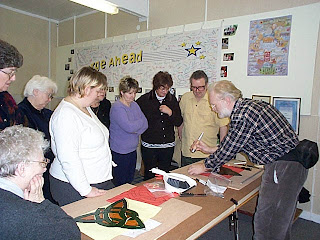 After a number of sessions where the community workers assisted ideas development, a plan was devised. The advantage of the pit wheel design was that it could be broken into a number of small panels that each person in the group could work on. Those who were faster, could tackle more than one panel. This photograph shows the elements drawn onto cut pieces of paper to arrange within the overall constraints of the pit wheel design. 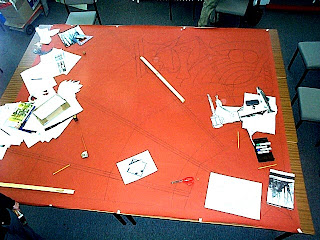 There were many discussions on how the elements should be arranged. As you can see, some people engaged with this portion of the 13 week project differently from others. 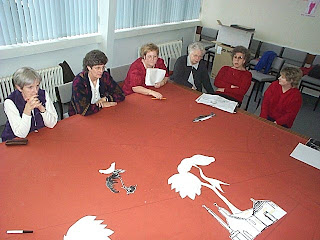 Some people tended to be watchers at this stage, and others just drove the whole project forward. 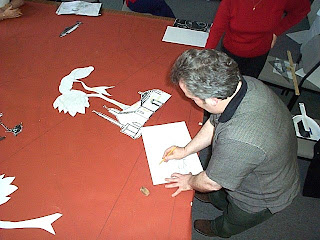 Within a few weeks, the design phase was complete and the cartooning done. The glass selection followed and was governed by an overall background with the narrative elements fitting into this. Panels began to be completed relatively quickly. 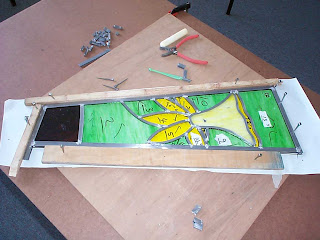 People of all ages and abilities took part. As with the best of cooperative projects, those who were quicker or better at some elements helped others. 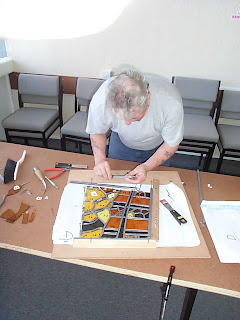 The project was nearing completion in the late Spring and a whole day of cementing was completed outdoors in brilliant sunshine. The downside was that a lot of us got sunburned!

This was a warm and friendly group of people who worked with determination toward the goal of having the panel established in the cafe area of the centre. However, the funding for the steel framework and the lighting was not forthcoming from the local authority. So the individual panels remain packed in a case waiting for funding to complete the project.

Posted by Stephen Richard at 17:29